Spa at The Burj Club in Dubai

IMPORTANT:
This is NOT a sponsored post. I paid for my visit to The Burj Club.
I also asked and got permission to take photos and write about my experience.


When I was planning my vacation and it turned out that my flights qualified for Dubai Connect, I jumped for joy and started to make a list of all the things I wanted to do during my 22 hours in the United Arab Emirates.

Unfortunately, because my flight left Haneda late (yep, it was a typhoon night), we also landed late, and my carefully planned day went out the window.

What I kept in my itinerary were the two things I had already paid for: a spa visit and a trip to the top of Burj Khalifa. Conveniently for me, the spa also happened to be located at Burj Khalifa. And because Dubai is still technically in Asia (go and check, if you don't believe me), I am dutifully blogging about it here now. 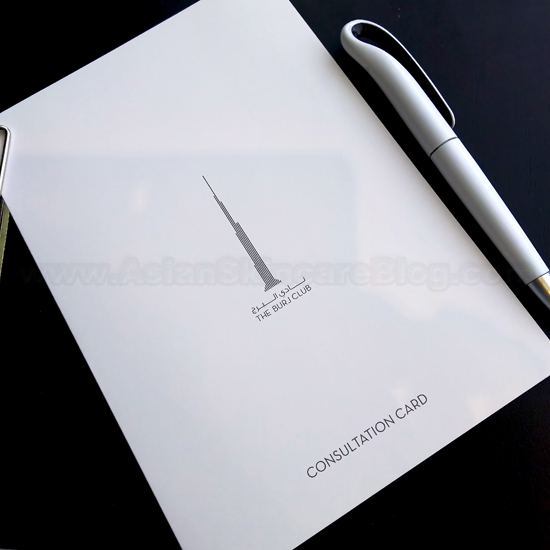 If you don't know what Burj Khalifa is, I suggest you stop living under a rock in a galaxy far far away and do some googling. Stat. 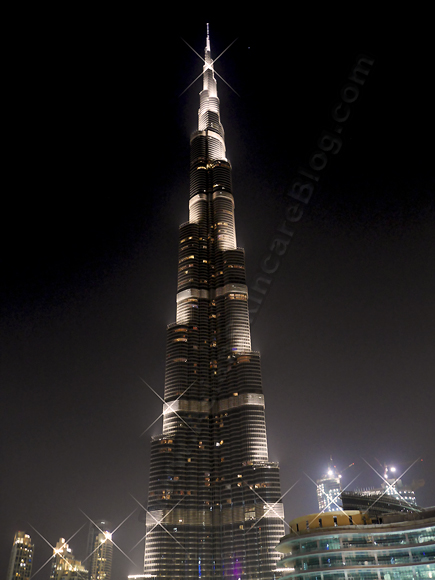 I booked both of these "attractions" using Get Your Guide (no, I am not going to link to it) and I can't NOT recommend it enough. They are a rip off. Use them only if you have money to burn and need the convenience of booking everything all at once. 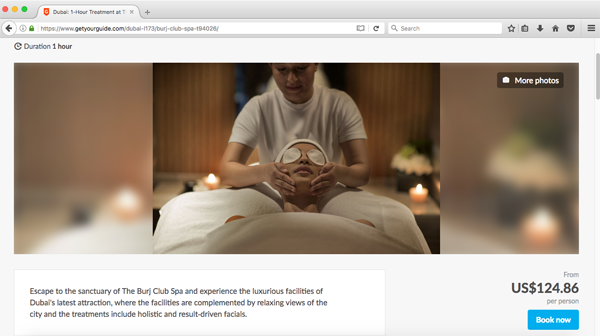 As you can see, my one-hour treatment at The Burj Club Spa cost me US$124.86.
Dealing with Get Your Guide was a nightmare. First, I had to repeatedly email them asking for my voucher. They ignored my mails. I finally started complaining on Twitter, and that got their attention.
At the same time, I had enough common sense to contact the spa directly, and I am glad I did, because Get Your Guide didn't. No great surprise here.

When all was finally sorted out and booked and confirmed and reconfirmed, it turned out that I could have booked my treatment directly and saved myself a lot of frustration in the process. Oh, well... Next time...
Because, trust me, there will be a next time...

The Burj Club is Dubai's most exclusive full service spa and health club, and I have been dreaming of going there for quite a while. Once upon a time, I read a blog post written by a woman who actually lives at Burj Khalifa (yep, rich people have apartments there) and who went to The Burj Club Spa, and that's how the place ended up on my "things to do in Dubai" list. 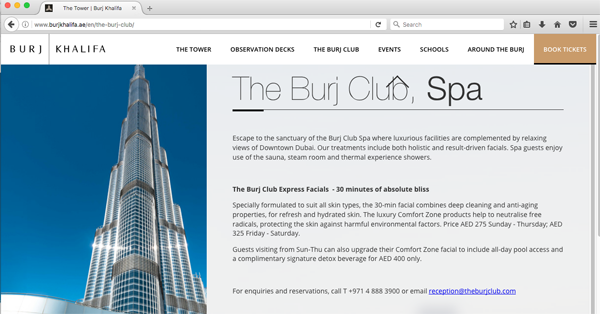 I was asked to arrive about 30 minutes earlier than my scheduled treatment time. I was instructed to go to the "residence entrance" and proceed from there. Sounds easy enough, right?

But... I got so excited riding the metro (driverless, and yes, I was sitting in the very first carriage and taking photos) that I totally forgot what time it was. When I finally remembered, I decided to run for a taxi, because I had no idea where the Burj Khalifa "residence entrance" was.
It turned out that my fresh off the boat taxi driver had no idea either. I wish I was joking, but he really didn't know. He dropped me off at the back of the tower and I hiked along the service road in 45 degree heat (that's 113F for you, Americans).

It reminded me of another story from the blog of the Burj Khalifa woman, when she was expecting a package delivery and the package was returned to sender, because "there was no such address" according to the courier company.

The security guard on duty was pretty surprised when he saw a woman emerging from behind the security entrance, but was very kind and understanding when I explained what happened.
He pointed me in the right direction and by then I was already miserably late. That's why there are no pictures from the outside of The Burj Club. Sorry.

Here's the reception area instead. 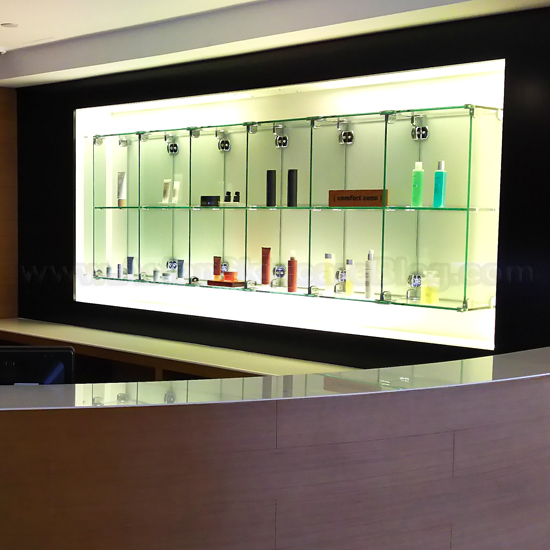 And a view from the chill-out lounge inside: 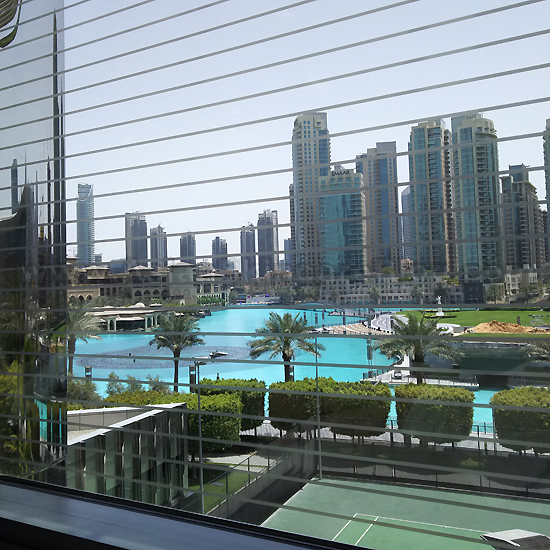 You see, I have been to quite a few esthe salons in Japan. Some were good, some were OK, and some were totally meh. And when I realized that I could experience a world class beauty treatment at one of the most iconic locations on the planet for the same price as at my local Japanese shopping mall, you didn't have to ask me twice.

At The Burj Club I wanted to feel like a special princess, if only for an hour. So when I finally entered and sat down and was greeted by the manager, whatever doubts I had about this spa idea, they were gone. I was a princess!

When booking, there was a choice of two treatments: a facial, or a massage.
I am very picky about my facials (especially since this spa has its own skincare line), and for this reason I decided to go with a massage. And let me tell you, it was an excellent choice.

I met my lovely therapist who showed me to the changing area. 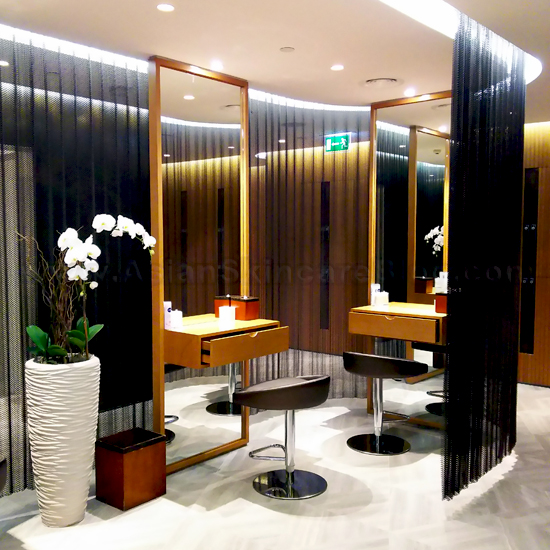 She explained how everything worked and let me be.
The country bumpkin that I was, I immediately forgot my locker combination and we had to call a security guy to open it for me. But that was later.
At that moment I was busy playing with the amazing showers and in the process managed to unintentionally wash my hair using the Caribbean storm setting (complete with sound effects). 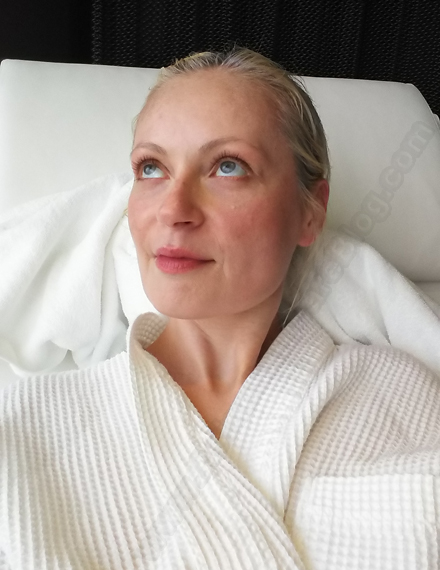 In the locker there was a bathrobe, slippers and a pair of disposable panties. There were plenty of fresh towels literally everywhere. 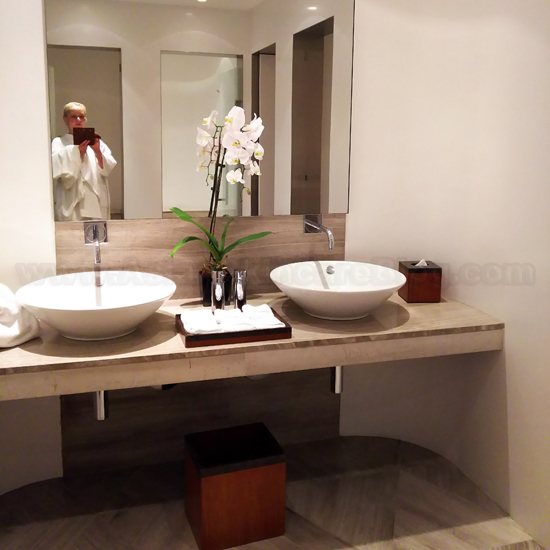 I wanted to visit the steam room, but as I was already late and behaving like a kid in a candy store, I decided to play nice and went to the spa's chill-out area. 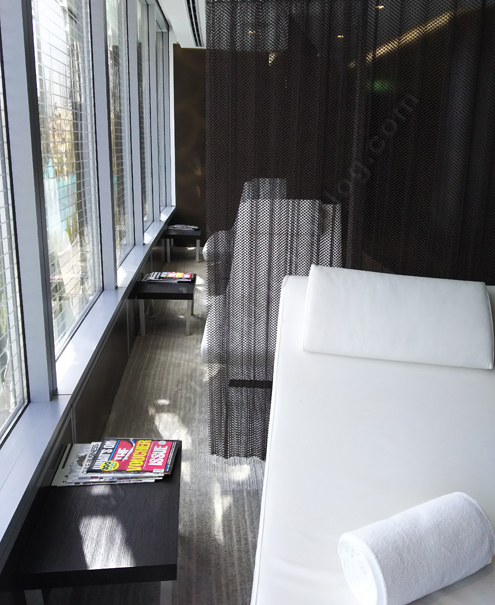 I plopped myself on a lounge chair, was served a drink and a snack and closed my eyes. 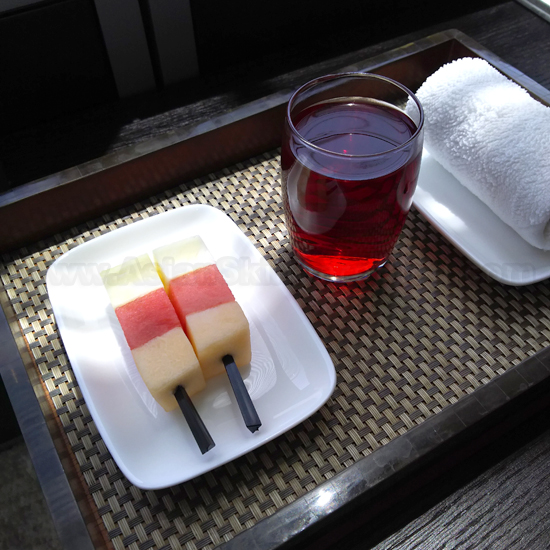 I was admiring the view... 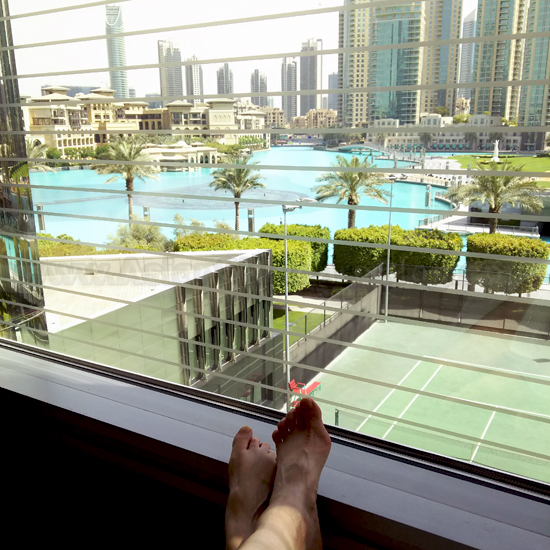 And I am pretty sure I fell asleep.

My lovely therapist gently woke me up, asked me to fill out a consultation card and went to prepare the room for me. 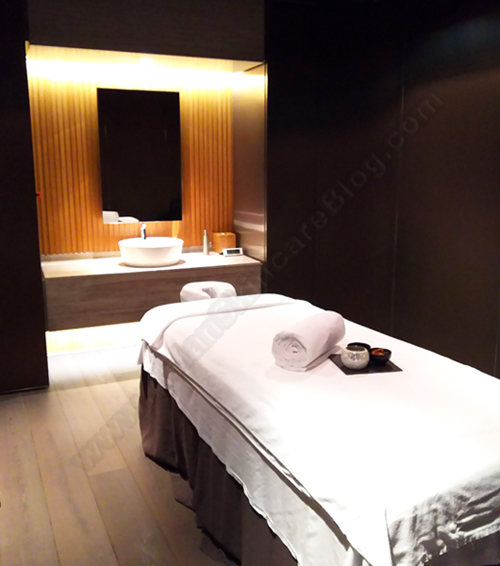 Once in the room, I was asked to select an essential oil. I chose the one that smelled the best to me, which just happened to be named "Asian" something something. 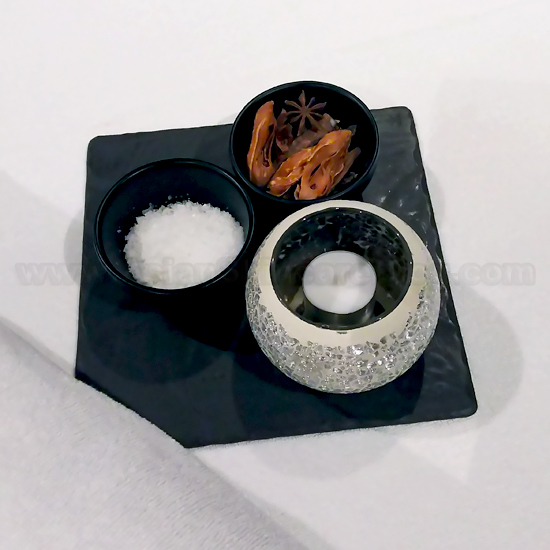 When she went to work on my tired, stiff, sore body, I simply fell asleep again. But before that, she asked me a few important questions.

(Would I like? What kind of a silly question is that? Lady, I live for head massages!)

And then, before I knew it, my one hour massage was up and it was time to get up and return to reality.
I enjoyed myself so much that I wanted to book a facial right there and then for that evening, despite being so picky about facials. Sadly, I remembered I had other plans for the rest of the day... 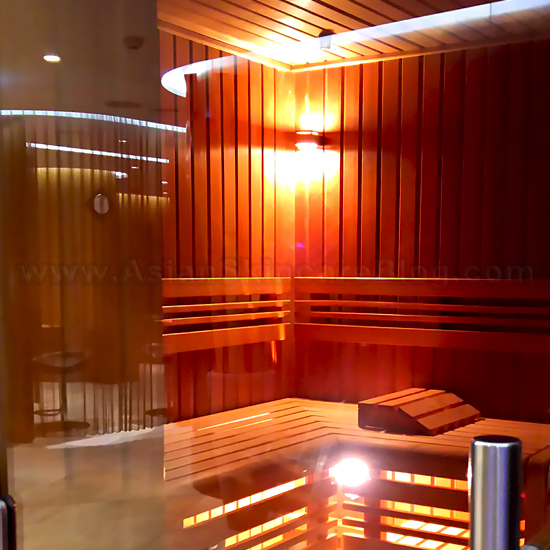 I quickly checked out the steam room, took another shower (while a security staffer was breaking into my locker, because I am an idiot), and admired the views. Judging by the occupied lockers, I wasn't the only guest there, but it definitely felt like it. I had total privacy and it seemed I had the whole place to myself. 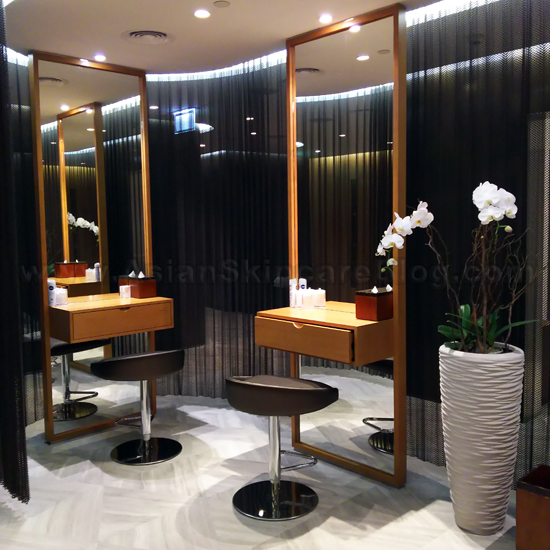 When I was dressed and ready, I got a tour of the Burj Club facilities. There are five floors in all, one is dedicated exclusively to women. There are two gyms, one is coed, and the other exclusively for women. 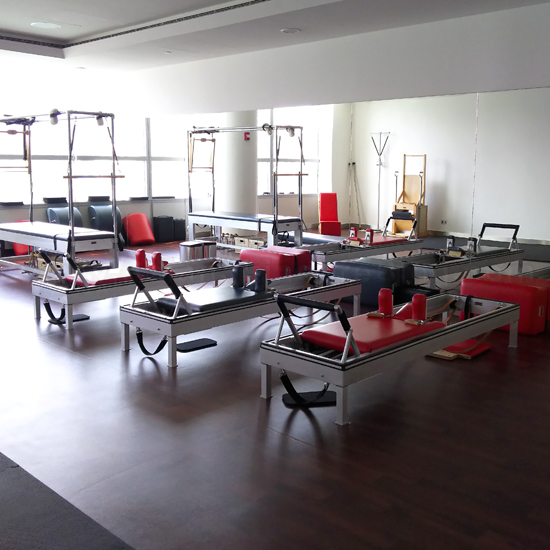 There are two swimming pools, one indoor (25 meters), and one on the roof with a view of Burj Khalifa. This is the "boring" indoor one: 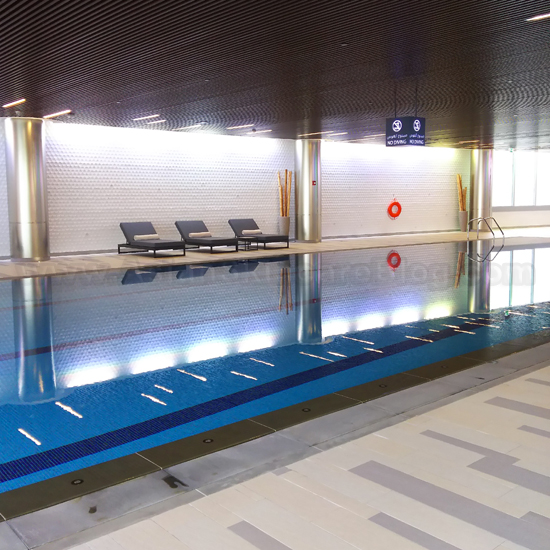 And let me tell you, when it's 45 degrees Celsius outside, the "boring" indoor pool looked that much more appealing.

Here's some info about the awesome rooftop area: 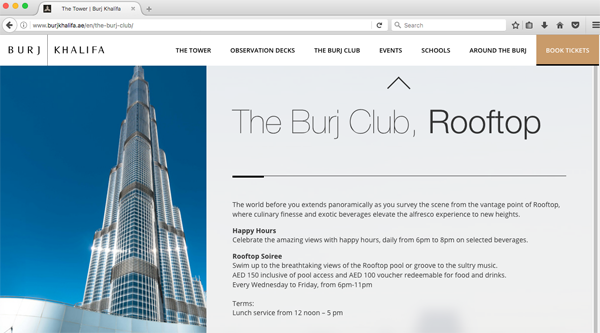 And that's how it looked in real life: 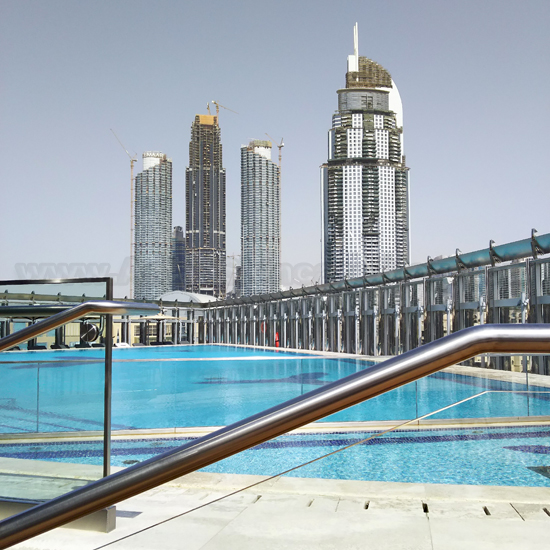 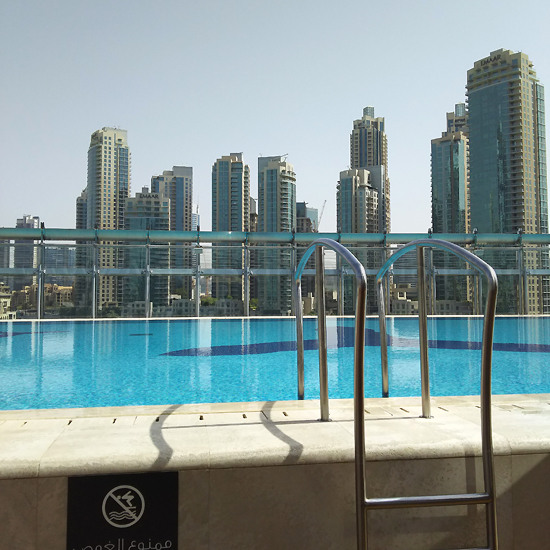 I didn't take photos in the direction of Burj Khalifa, because that end of the pool was being used by a group of Russian muscle men and their surgically enhanced women. Better not to piss them off, if you know what I mean. 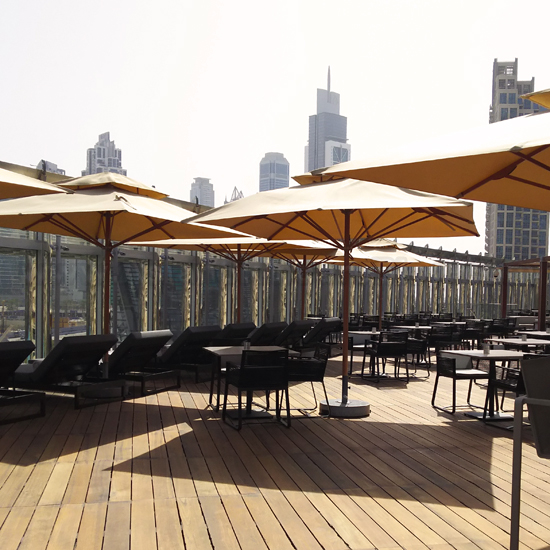 The staff invited me to use the pool, sit at the rooftop Juice Bar and just enjoy myself. Unfortunately, I had another appointment at 4PM and needed to get going. As I was about to be late again, I asked the manager, Nicola (I hope I didn't mangle her name) to help me get to the visitors' desk at Burj Khalifa. She kindly obliged leading me through staff-only passages and corridors saving me a looong walk and helping me be right on time for my next attraction. Thank you so much!

The Burj Club was a world-class spa experience for a surprisingly affordable price. Overall, I found Dubai to be a lot less expensive than I expected. Maybe it's just because I live in Japan and I am used to Japanese prices. But if that's the case, it means that for those of us who live in Japan, Dubai can be done in style without breaking the bank. 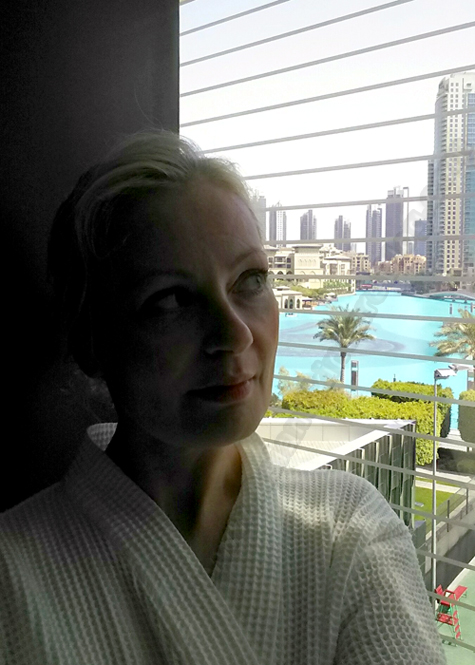 I want to go again.
I will go again.
Actually, I realized I love Dubai. I want to go there for a week. Or two. Or for the rest of my life. 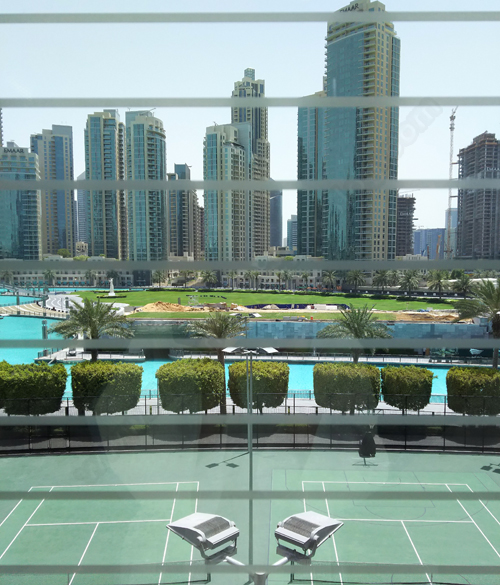 Next on my bucket list of Dubai spas?
Armani/SPA at the Armani Hotel and Talise Spa at Burj Al Arab Jumeirah.