It's so damn hard to come back to blogging after an extended break. Even harder when you are feeling sick. And it's cold outside. And you have a crapload of work to take care of before Monday morning.

Anyway, enough of this self-pity. We have a cushion review to write. 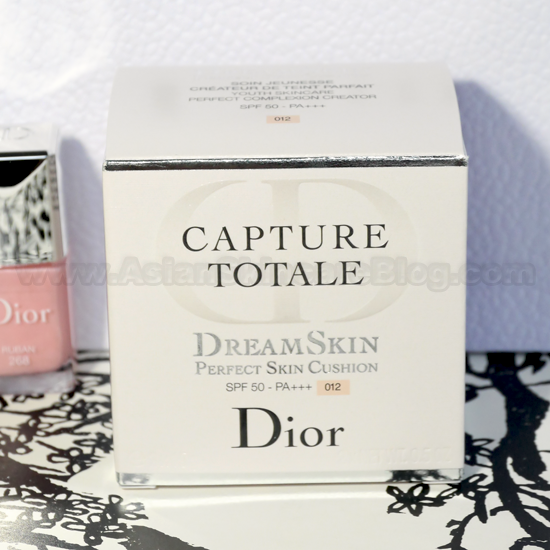 The name definitely is an improvement over the previous Diorsnow Bloom Perfect Blooming Skin something something cushion. And I feel like this is the only improvement and I could basically finish this review right here, right now.

Dior, I love you darling and you know it. But, damn... What is up with those shit cushions you keep releasing?
You have a direct pipeline to the Korean cushion gods themselves, the mighty Amore Pacific, and yet, even with their help and licensing, you still can't make a decent cushion. Oh, for fucks sakes, I'm done being pleasant here.

By now everyone should know what a cushion foundation is. If not, get on with the program and read some reviews (click here). It's basically liquid foundation in a compact. The foundation sits inside (or under, in some cases) a sponge on which you press with an applicator puff. Hence "cushion".
So there you have it, your portable liquid foundation that is easy to apply on the go.

Amore Pacific, the Korean cosmetic giant responsible for brands such as Iope, Sulwhasoo, Hera, Hanyul  and many, many others, is the granddaddy of cushion foundations. It holds a bunch of patents that make cushions possible. Dior wanted some of this cushion goodness and developed its cushions using Amore Pacific patents. The story is more complicated than that, but this is the TL;DR version for those of us with really short attention spans. 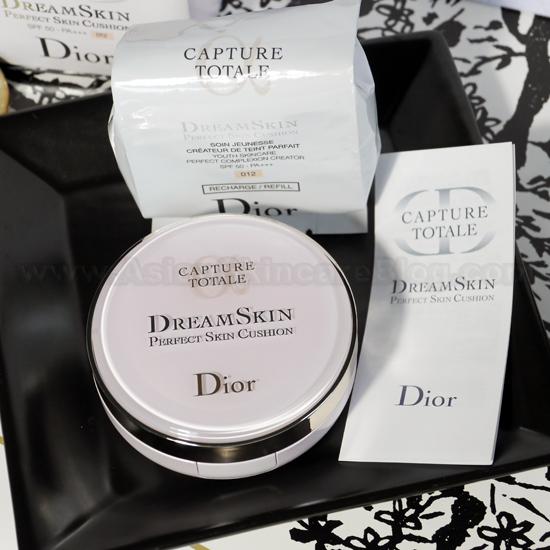 But before we proceed any further, I have a confession to make.

I was an early adopter and really gave them my all. Don't get me wrong, I still like cushions. But given a choice of spending my hard earned cash on a cushion or a bottle of traditional liquid foundation, I am going to go with the liquid.
Why? Cost-performance. And hygiene. But mostly the fact that with cushions you have to spend a lot of money for a minuscule amount of product. Which may, or may not, be crap. 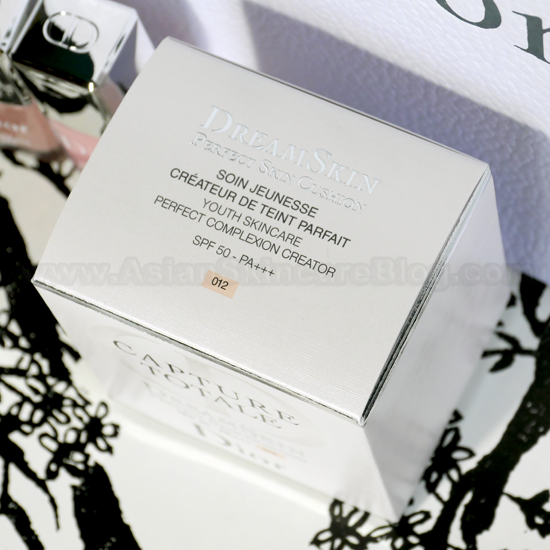 I wasn't going to buy this one.
I had no intention of buying this one.
I went in for some nail polishes and the sales lady remembered me from back in February when I was lamenting how quickly the previous Dior cushion oxidized.

This time the lady was prepared.
As soon as I sat down to wait for my nail polish swatches to dry, she grabbed the cushion and started to show me the new shades.

Here they all are. In Japan the darkest shade (030) isn't available.
I was going to go to the department store with my trusty MAC NC15 tube for comparison purposes, but I've been feeling lazy. I'll swatch all the colors soon and post an update.

My cushion comes in shade 012. It's not the lightest color, but it's nowhere near as dark as it looks in the screenshot above. 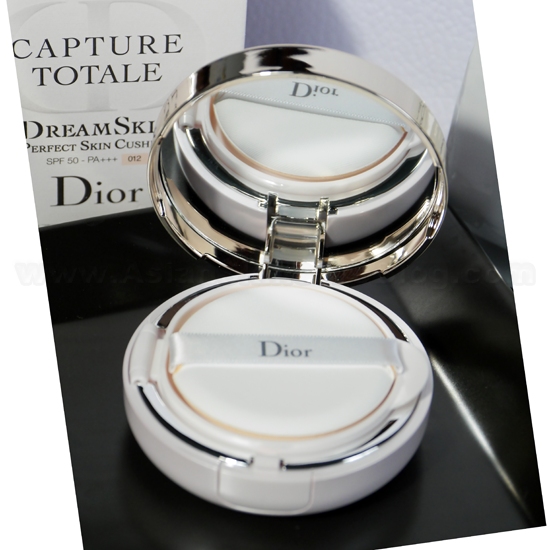 And what else can I tell you?
This cushion still oxidizes in a hurry. Granted, not to the point of some other base makeup products (ahem ahem, Blooming cushion, I'm looking at you), but close.

However, when applied over a white, glowing base, it looked pretty decent. That was what fooled me. That's why I bought this cushion. Unfortunately, when I brought it home and tried to play with it the next day, it didn't play nicely at all. 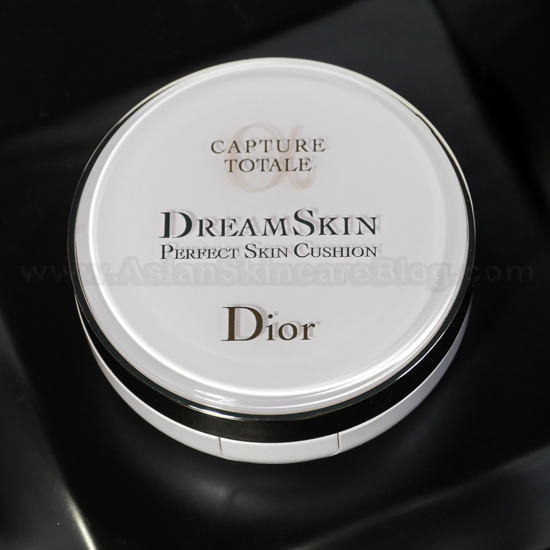 It hated my usual sunblocks.
Yes, despite having SPF50 PA+++, this is not a stand alone  sunscreen. Don't be an idiot. Don't rely on a makeup product as your only source of sun protection. It amazes me that some beauty bloggers actually refer to cushion foundations as "sunscreens". They are not. They are makeup. But hey, it's your face and your photo aging process, so enjoy!

So anyway, this Dior Capture Totale Dreamskin Perfect Skin Cushion hated the usual sunblocks I use. It would roll and flake forcing me to redo parts of my routine. 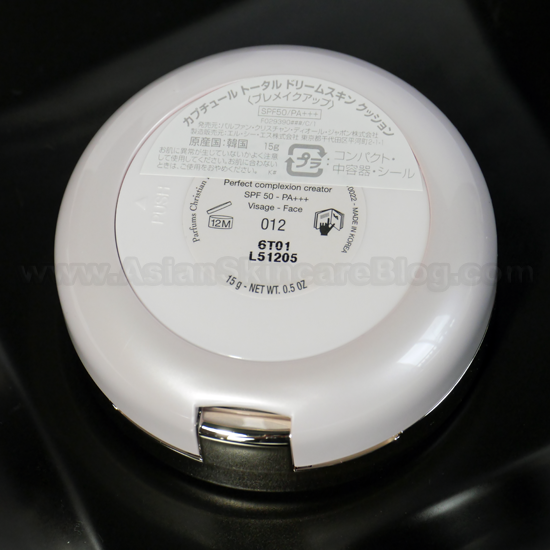 It needed to be set with powder.
Now, on a normal day I have nothing against that. But... it seemed to only like the loose powder from Dior. With that combo it looked perfect. The other loose powders I tested it with (Laura Mercier, Kanebo, different Kanebo and Kose) made it settle angrily into wrinkles and fine lines. Seriously, it accentuated fine lines in places I didn't know I had them.

And finally, its staying power.
Less than 5 hours. More like 4 hours. And that was with using a primer. This is not what I expected from a cushion that cost me an arm and a leg and a firstborn.  Meh all around.


So, that's what I say. Because what I say is the reason why you're reading this review in the first place. But, in the name of fairness, let's check out what the marketing honchos at Dior have to say about this cushion. 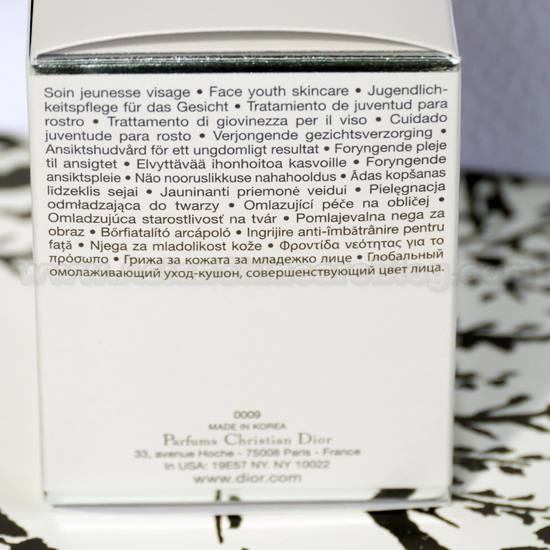 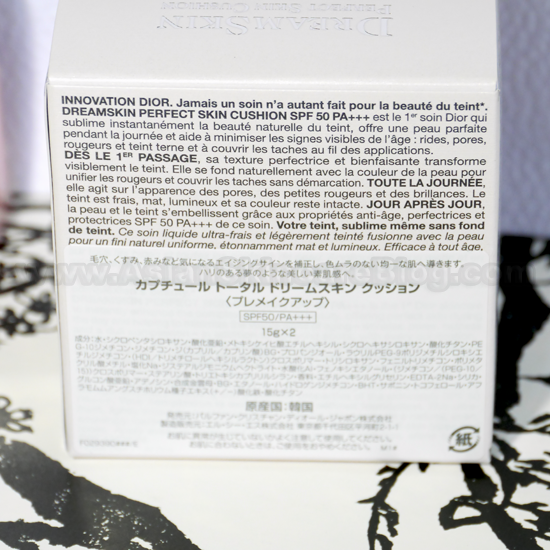 And here in a language that I can actually understand: 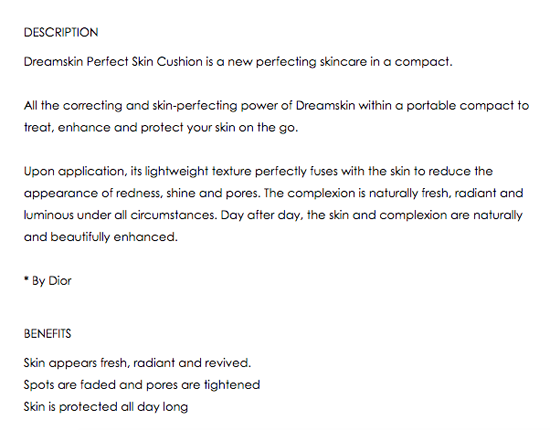 Such awesome claims would mean an awesome ingredient list, right?
Right?
Well... not quite... 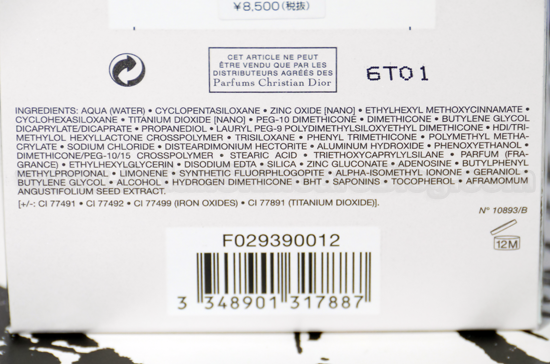 Dior touts its organic gardens somewhere in the Alps and Madagascar.  That's supposedly where the "natural" ingredients came from. Well, you know what? They are at the very end of this ingredient list. They do nothing in this product and any magical skincare results you allegedly experienced while using this cushion, are nothing but wishful thinking.

I'm very curious about these Dior gardens and would like to visit them someday. Or at least locate them on google maps, or something. Because considering the sheer number of products that Dior offers, and considering that nearly all of these products require plant extracts, these gardens must be mighty huge to meet all the demand. Or, it just shows you that the highly touted ingredients appear in truly minuscule amounts. Just enough to justify fancy marketing slogans. 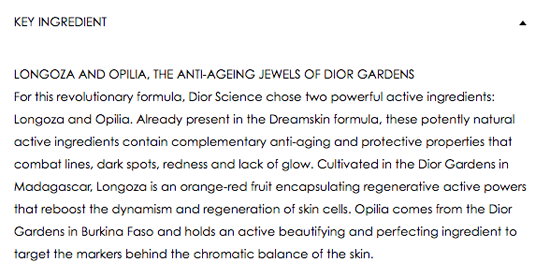 And hey Dior, I always wanted to visit Madagascar. Hook me up! I want to see your Dior Gardens there! 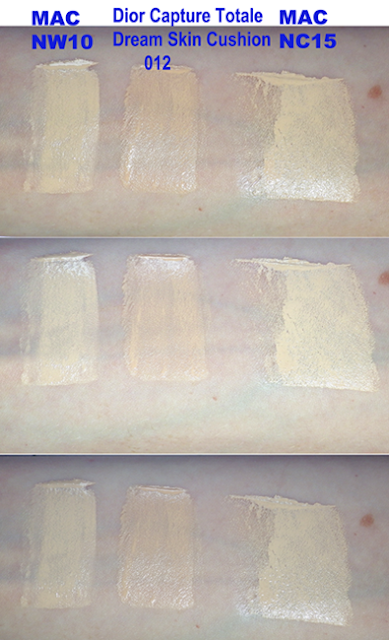 See what I mean?
Why the hell did I buy this thing in the first place? 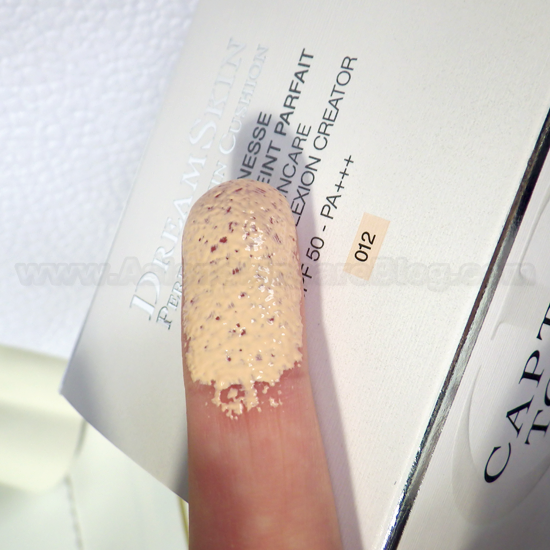 Overall, I am very disappointed. It's a very average cushion with an above than average price tag.
For 8500 yen plus tax (yes, I live in Japan and that's where I bought it) you get two refills of 15 grams each and a compact. Standard stuff for Korean cushions, but a generous novelty among western and Japanese brands.

The puff is identical to the puffs you can find in Korean roadshop brand cushion compacts: It doesn't feel as sturdy as the typical blue and white Amore Pacific puff we all know and love. This is a flimsier version. 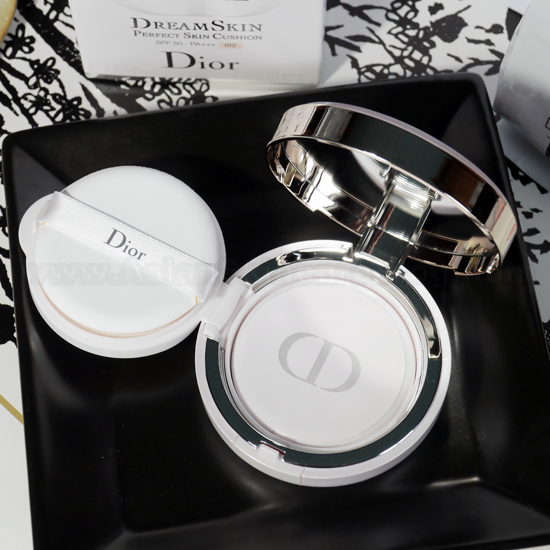 The surface is protected by a sticker so you know that nobody else was playing with your cushion.
When you peel off the sticker you can see that the sponge (the cushion) is the same as in the older generation cushions from Amore Pacific brands: 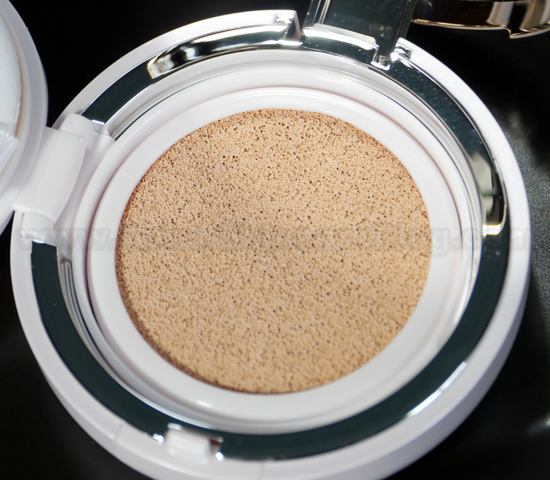 It's a lot finer than the abominations offered by the L'Oreal brands. Finer pores mean that the foundation is dispensed a lot more evenly onto the puff, and hence easier to apply on your face.

So, is there anything else I can tell you about this cushion?
Other than "save your money and don't buy this crap"? 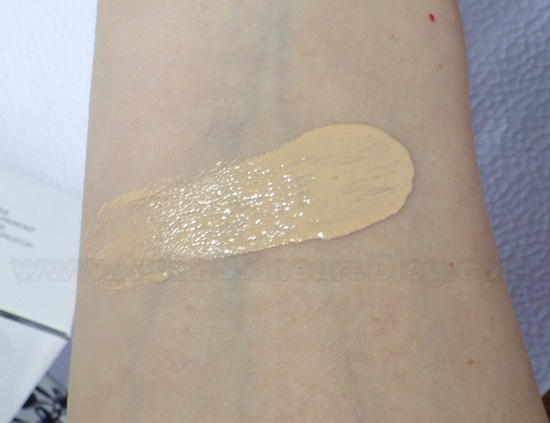 The finish is moderately glowy, the coverage is minimal. It will even out the skin tone but that's about it. It won't cover any major redness or blemishes. It may accentuate pores and settle in wrinkles. It will oxidize.

I always say "In Dior We Trust" when it comes to color makeup.
But Dior still has a long way to go before they make a cushion that we can trust.

If however, you like fancy logos and high end brand names impress you, then by all means, go out and buy it. Just don't complain later on.
You've been warned... 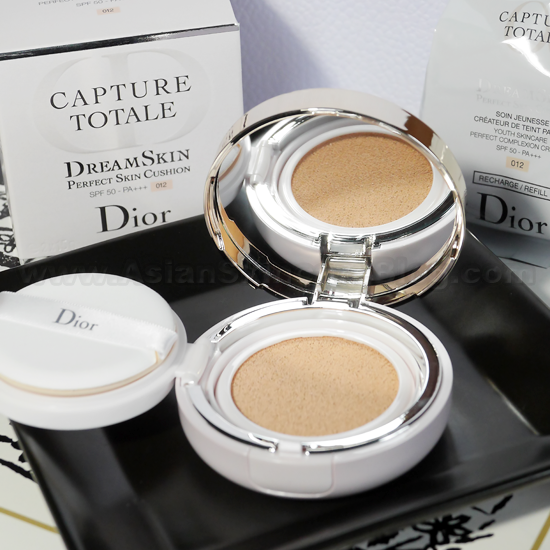 For 8500 yen plus tax I could have had 15.3 tall dark mocha chip soy frappuccinos. That means about one every week for 4 months. Yet instead I have this crappy cushion...