Whoa!
A month without a new post!
How did that happen?

My new job punched me in the face, full force, so hard that it took me a month to get up and get my sh*t together. No, I don't work for the UFC as an MMA fighter. I'm just a proper Japanese salarywoman now. With work meetings that last into eternity, and nomikais to attend, and urgent paperwork to take care of, and weekend work, just because. That sort of stuff.

What keeps me going is payday (that's the reason I took this job in the first place) and one of my co-workers, who looks like a Japanese version of Robert Downey Jr.

Anyway, what was I going to talk about today? I forgot already. 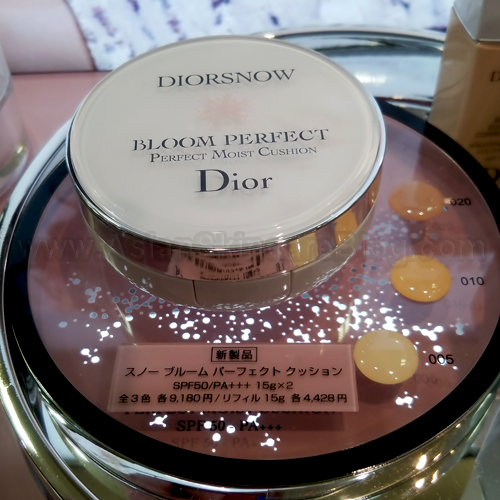 That should tell you everything you need to know about this sad mess that is Dior's first attempt at a cushion foundation. That I am more excited to tell you about the guy I work with than this cushion. The guy is hot, this cushion is not.

If someone had told me this two months ago when I first bought this cushion, I would have died laughing. But here I am, two months later, ready to finally admit the truth. 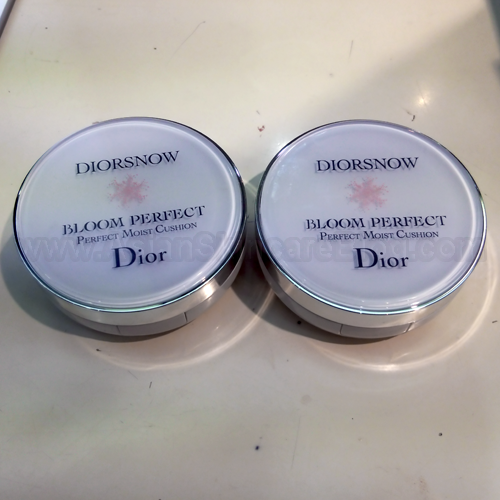 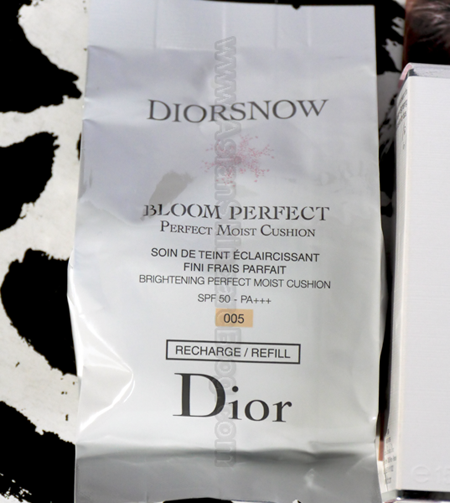 I love Dior. I have always loved Dior. I have loved Dior even when the products I bought were not working for me. Because Dior, you know? Just the name alone makes me feel important and fancy.
I live and die by Dior mascaras and Dior fragrances.
When Diorsnow first appeared on the market (yes, I am that old), my panties nearly melted off from sheer excitement.

When last year the news came out that Dior was working with Amore Pacific* to create a cushion foundation, it was as if a heavenly cherub choir was singing. I mean, Amore Pacific. Cushion. Dior. Impossible to f*ck it up, right? Right? RIGHT???

* Amore Pacific is a South Korean cosmetics giant, the home of such brands as Laneige and Iope among many others, that basically created the cushion foundation as we know it. 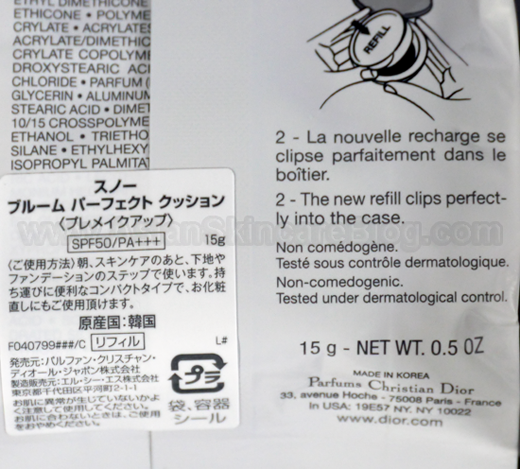 And then the cushion landed.
And everything has changed.

My world will never be the same.

So let's get this train wreck started, shall we?

Who the f*ck thought of this ridiculous name? Did they have a company-wide contest for the longest and most incomprehensible name and the janitor, who didn't speak any English, submitted the winning entry? 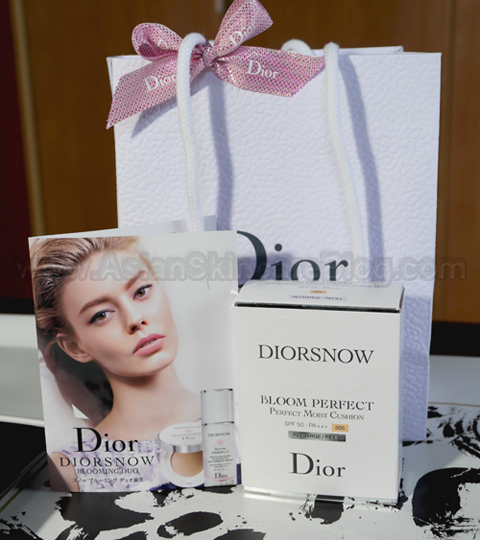 Yes, I know that this Diorsnow long name cushion is sold with a refill, the way Asian cushions are, but seriously, 8500 yen plus tax? 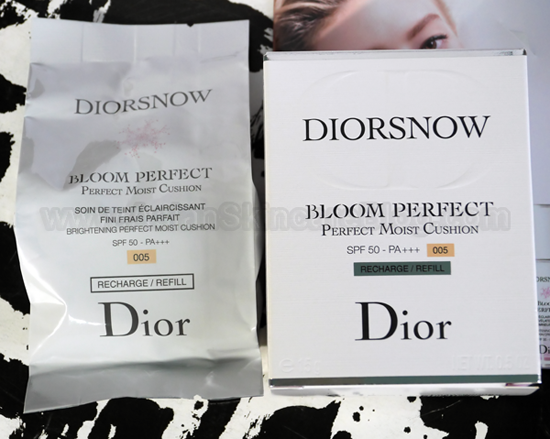 What is this cushion made of? Unicorn farts and pixie dust?
Probably I'd bitch less about the price if this was a decent cushion, but alas, it is not.

Luckily, I didn't completely lose my mind because Dior and only bought a refill. 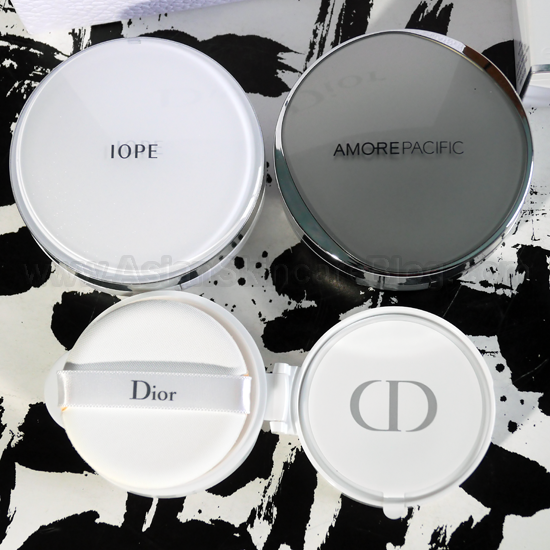 And luckily, because it was developed with Amore Pacific, it actually fits into Amore Pacific cushion compacts. 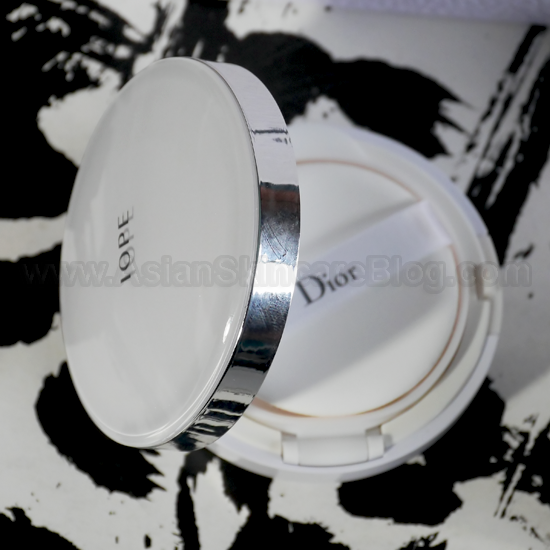 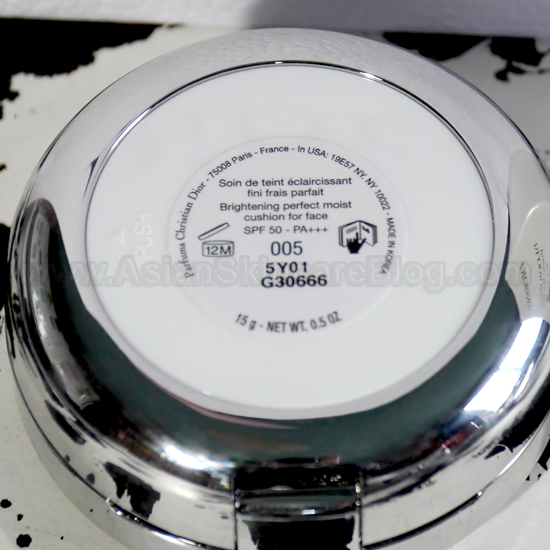 This cushion was released in Japan the same day that the Shu Uemura cushion hit the stores and, of course, I was at the Dior counter that afternoon ready to shop. 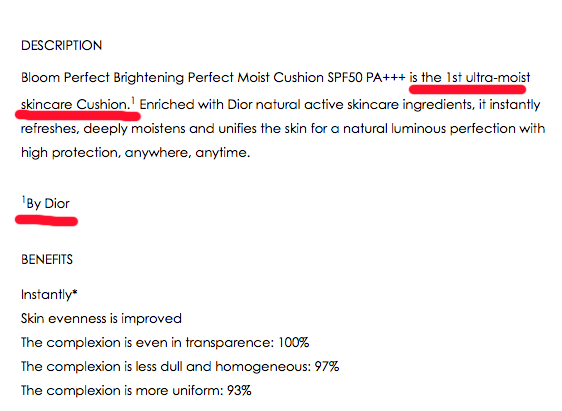 I'm glad they added that by Dior disclaimer, but I'm sure there will still be naive souls out there reading it and believing that it was Dior who came up with the first cushion ever.


I asked the sales assistant for the lightest shade, 005, and she dutifully swiped some on my hand. And we both stared in utter horror.
She looked at the cushion label, she looked at printed color table, and thinking the cushion was mislabeled, actually went to open a new one.
She swatched it on my arm again, and the same thing happened. The swatch turned into a dark mess within 30 seconds.
Her exact words were "I don't know why it's so dark, but it's too dark for you. I can't sell this cushion to you. The color looks nothing like the swatch table. I'm so sorry." 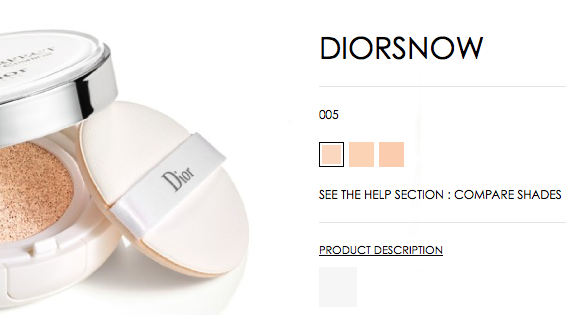 005 was supposed to be the lightest, developed with fair-skinned Japanese women in mind. I am not Japanese, but there is plenty of Japanese base makeup I can wear. Because it's light enough for me. And because it doesn't oxidize immediately upon application. 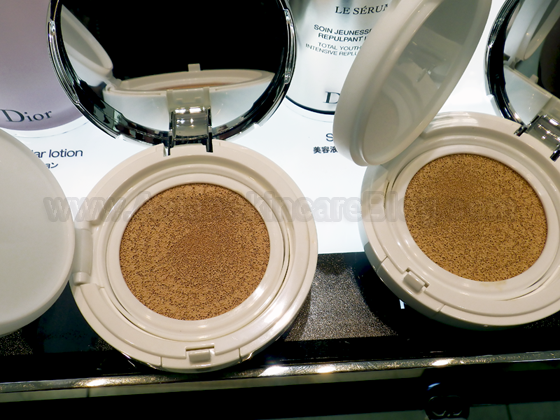 A week later, at a different Dior counter, the sales staff was much better prepared. They clearly knew that this shit oxidizes like crazy and were instructed on how to apply it.
I was sat in front of the mirror and flat out told that the color is supposed to be that dark. Because, guess what? It's supposed to be applied onto a pasty white primer base to look good. 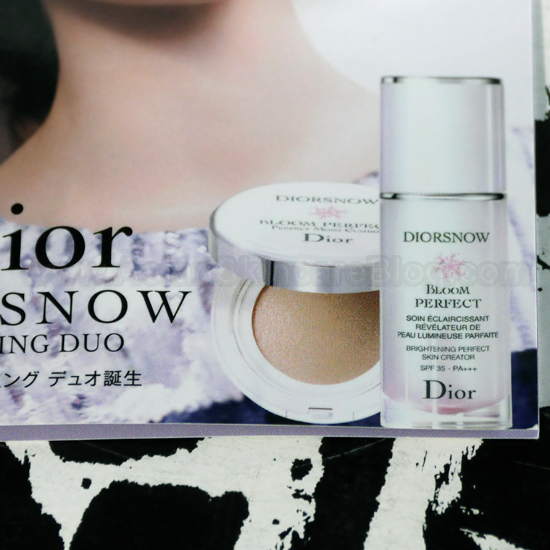 Having said that, the sales lady grabbed not one, but TWO bottles of different white primers and went to work. When she turned me into a white faced geisha, she then applied a layer of cushion on top of it all.

She also clearly knew that this cushion has a lasting power of zero, because she then proceeded to use copious amounts of powder to set it all into place. She didn't stop until she turned me into a noh mask. And despite her best efforts the foundation still managed to darken. She pretended it was supposed to look like that. As if having a face several shades darker than the neck is a new fashion trend, or something. 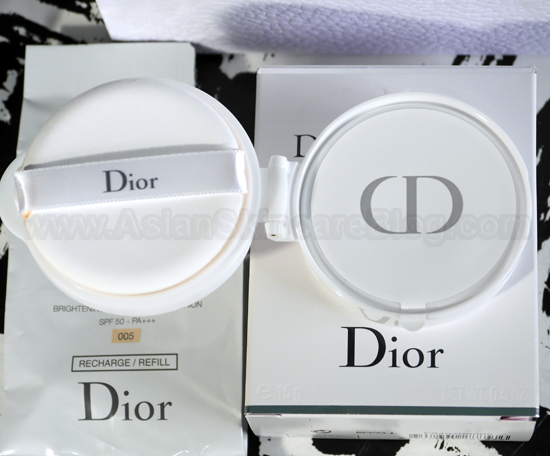 When I was leaving the counter, I overheard another customer, a middle aged Japanese woman, complaining that "Why is this foundation so dark? Is this the lightest color?"

That somehow leads me to believe that Dior's mindset is still stuck in the colonial times, when them Asian savages were considered yellow faced beasts.
Asian brands somehow manage to make a variety of shades to suit a variety of lighter skin tones (darker skin tones, that's unfortunately, another story), both Asian and non-Asian. And a western brand apparently took the reference to "yellow race" quite literally.

What the fuck Dior? 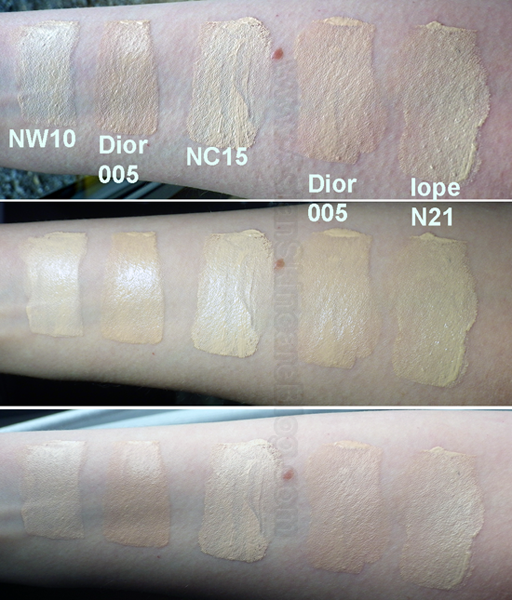 Anyway, is there anything I like about this cushion?
Apart from the fact that it looks like a Korean cushion and fits into Amore Pacific cushion compacts, no, not really. 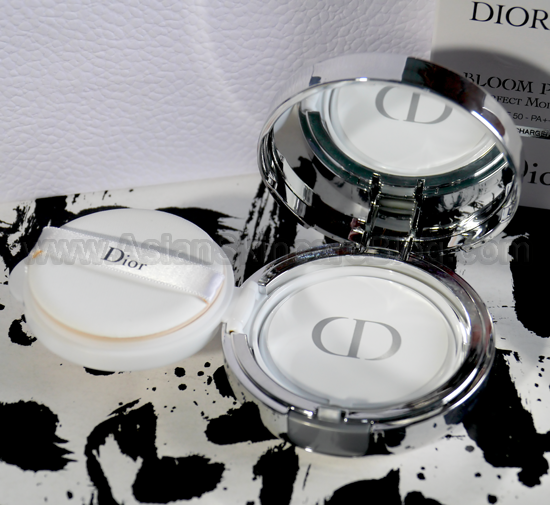 Its magical brightening powers are supposed to come from its star ingredient - edelweiss a.k.a. Leontopodium alpinum. 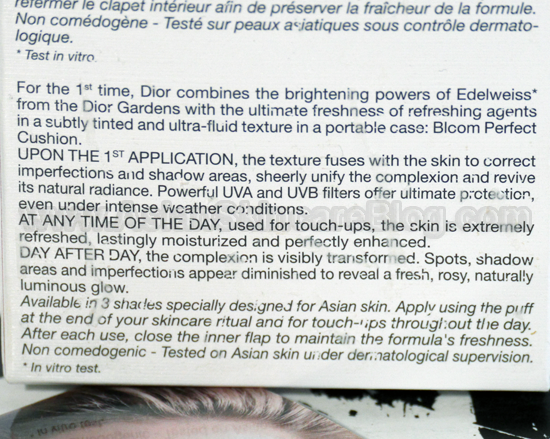 But when you look at the ingredient list, you will see that Leontopodium alpinum extract is the 36th ingredient out of 48 ingredients total. Ahead of this magical extract we have "parfum" and nearly all other fragrance ingredients in the formulation. Which makes it clear that the poor edelweiss is there in trace amounts, only for marketing purposes. 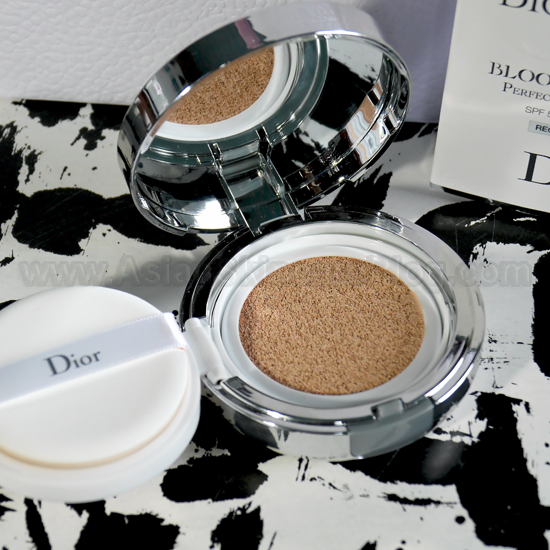 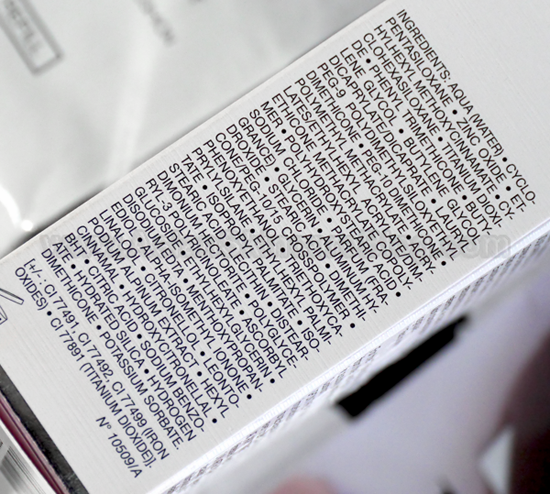 So there you have it.
What should have been tears of joy that we finally get a decent cushion from a western brand, turned into the weeping hour over my own stupidity for buying this nonsense.

At least the puff looks familiar, wouldn't you say? 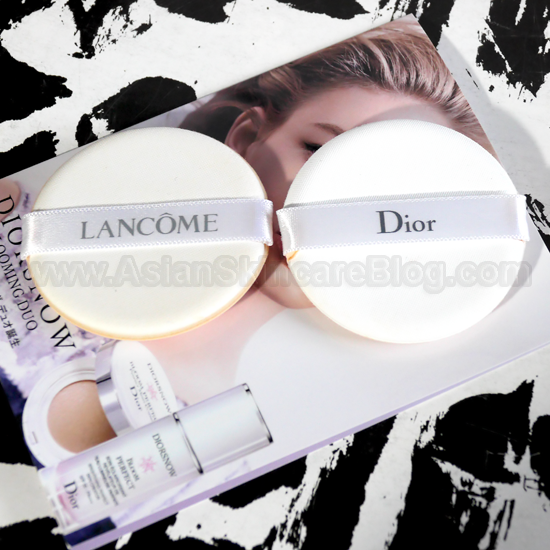 And the other side: 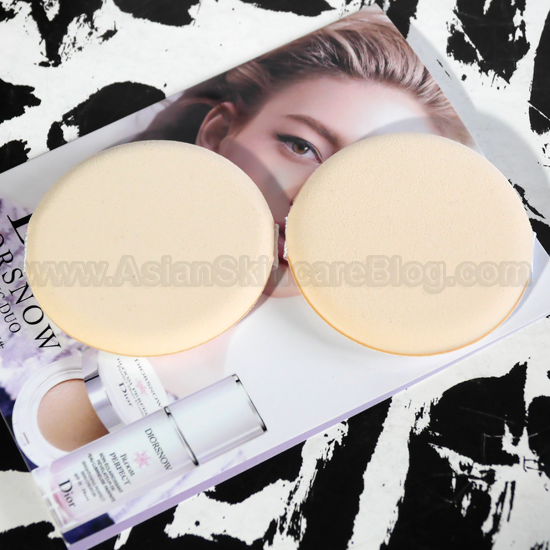 I should have listened to myself and sat this one out.
But I didn't. Because Dior, you know.
Stupid me.