Sometimes a review basically writes itself.
And sometimes you birth it in such pains and for such a long time that the very thought of it makes you physically shudder.

This is one of those times.

I'm not a snob. I just wanted something that would be affordable and effective.
Sidmool was definitely affordable. But effective? Hmmm... It was a mixed bag of effects, from dazzling and awesome to "is this thing doing anything at all?". 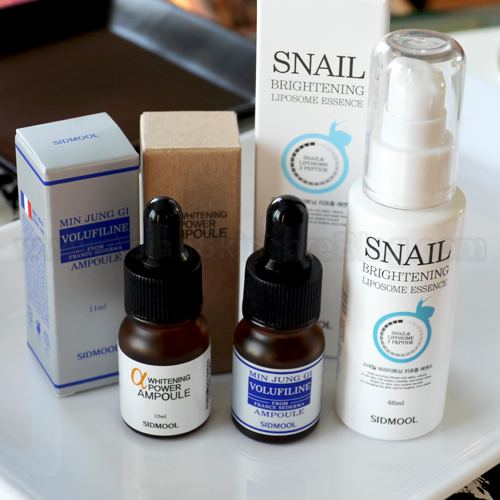 But first things first.
What is Sidmool, I hear you say?

Sidmool is a South Korean cosmetic brand that focuses on natural, high impact ingredients and simple and unadorned formulations. Their products contain only what's absolutely necessary.
Sidmool was founded in 2006 and currently offers a full range of skincare and makeup products.

The company claims that it listens to and values its customers feedback. As long as said customers are Korean. When it comes to foreign customers, Sidmool doesn't give a flying f*ck through a rolling donut. In fact, the company goes out of its way to avoid selling to international consumers. It went as far as requesting that Jolse, one of the popular on-line stores selling Korean cosmetics, stopped offering Sidmool products.

I used to get my Sidmool from Jolse.
Now you have to look for Sidmool on G-Market (a Korean version of Rakuten, or Amazon), ebay, or brave Sidmool's own convoluted internet store, which is, no surprise here, completely English-language unfriendly.

I mean, it takes a special kind of company to basically tell its foreign customers off. Well done, Sidmool! You're such a speshul snowflake. 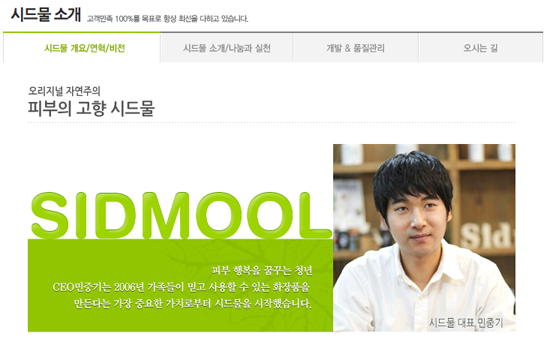 Why is Sidmool so foreign customers unfriendly? Hmmm... Does it have anything to do with how Korean cosmetic companies list the ingredients of their products? We all know the ingredient labeling order is different in Korea than in other parts of the world - link.
Thanks to those differences Korean products very often look vastly superior to non-Korean cosmetics. Of course this superiority is only superficial, and when the ingredient lists are re-shuffled to conform to American or Japanese regulations, the magic is no more.

So, let's talk about the products, shall we?

There were four of them, but one I gave away (and that friend later chucked it saying it was awful), so only three are pictured here. 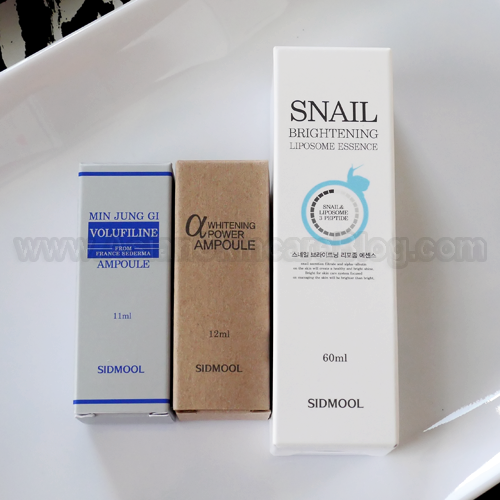 I have a couple more, but I'm just not itching to try them. Not at all.

We'll start with the hits, and then talk about the misses.

Sidmool Snail Brightening Liposome Essence turned out to be my very unexpected number one hit. 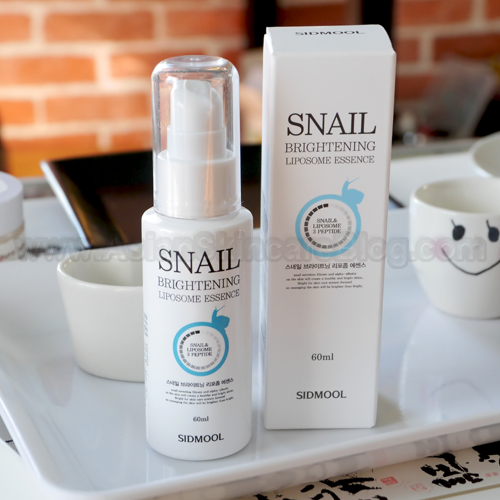 Having said that, when I realized that a snail product was in the shipment, my "waste not" philosophy kicked in and forced me to try it.

To my huge surprise, my skin actually liked Sidmool Snail Brightening Liposome Essence. Which leads to me believe that there is very little of actual snail secretion filtrate in the product. Oh wait, the ingredient list confirms that, only 30%.

Here you can read what this essence claims to do. Your skin will be brighter than bright. Yo people! The fairest of them all! 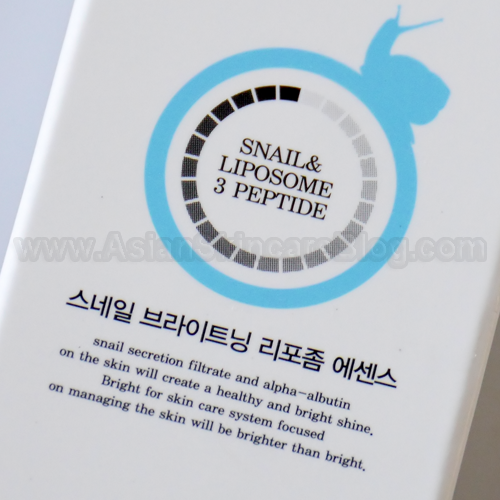 Did it work?
Yes and no.

I used it in the mornings only. I liked how it dried matte and could be followed with whatever else I needed it to follow. My skin definitely seemed brighter, however the results were only temporary. A few days after stopping the essence my skin returned to its normal pinkish, eternally flushed state.

You see, just recently I got officially diagnosed with rosacea. I have been suspecting rosacea for years. I have no lesions, no papules, no pustules and no swelling. My occasional breakouts are due to other triggers.
My rosacea manifests itself in facial redness only. And it's usually limited to my cheeks and nose.
It was only when rosacea started to affect my eyes that the official diagnosis was finally made. 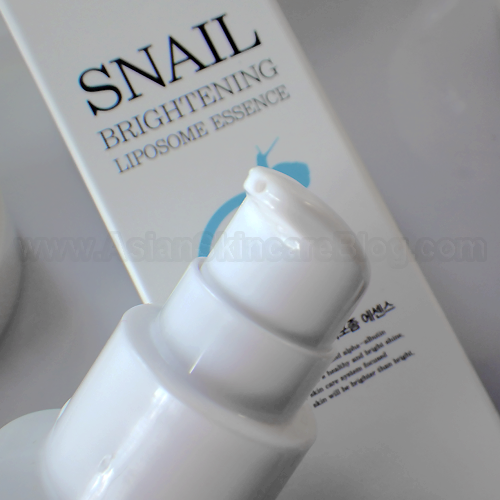 So what did Sidmool Snail Brightening Liposome Essence do for my skin?
It worked to control the flushing. My cheeks were less pink. To the point that on good days I could get away without using any CC or BB creams. I only slapped on some sunblock and was ready to go.

However, as I have mentioned before, the results were only temporary.

Note:
This is not a moisturizing essence. If you have dry skin, you may find your skin getting dryer if you do not amp up the moisture.
If you have oily skin, this just may work to control your oil production. As you can see, it's a gooey, watery slime that dries completely matte. It plays nicely with whatever else you need to put on top of it.

And it really does a great job of controlling the redness and making the skintone appear more even and clear.
It has no scent, none whatsoever, which made my nose very happy. 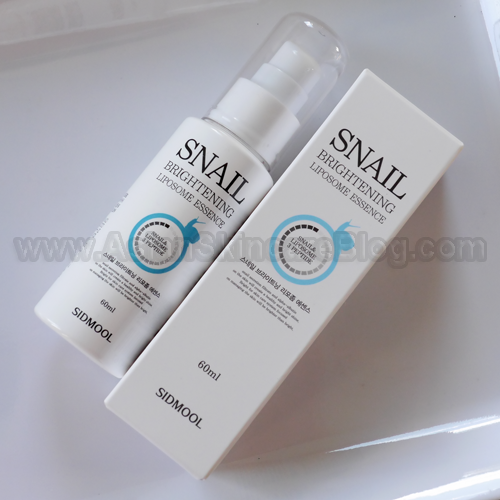 Having said that, it has snails. It might be too depressing for some people.
Am I going to repurchase?
Despite it having snails, and I am anti-snail in general for ethical reasons, I am very much on the fence.
I like what this Sidmool Snail Brightening Liposome Essence does for me. But the snails... But the results... But the snails...
I might get it again.

Chances are I will go back to using Hanyul White Chrysanthemum Radiance Serum first, because despite the strong scent, it doesn't have any snails. And its ingredients are legit confirmed to combat rosacea.
However, I am not ruling out having a second go at Sidmool's snails.

I didn't expect Sidmool Alpha Whitening Power Ampoule to be a hit at all. I usually don't have much luck with products promising "whitening" or "brightening". 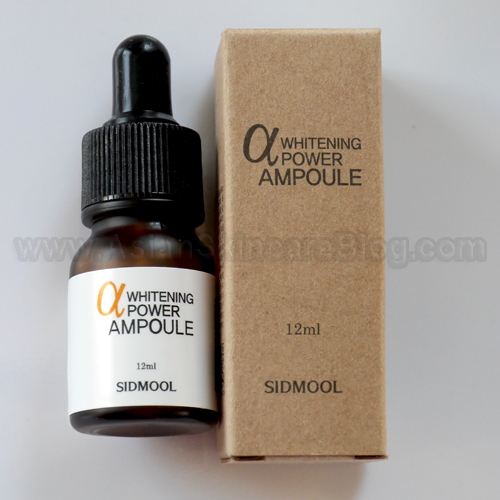 
All I can say about Sidmool Alpha Whitening Power Ampoule is that it works. I don't know how, what or why, but it does. 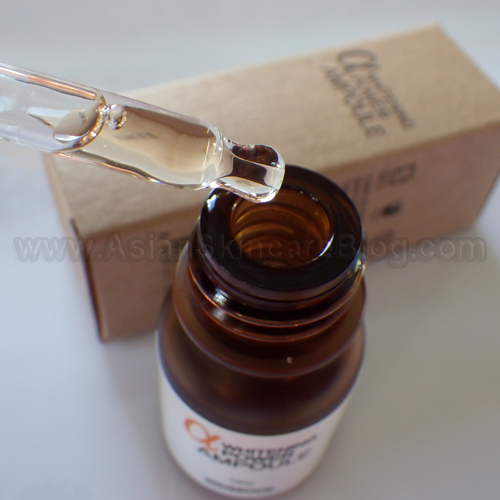 I have tried it in three combinations:

Number 3 brought the most dramatic results. And even though I am really hesitant to repurchase the snails, I will be most definitely buying Sidmool Alpha Whitening Power Ampoule again.

I want to bathe in this stuff. Sadly, as the bottles are teeny tiny it's not really a feasible option. 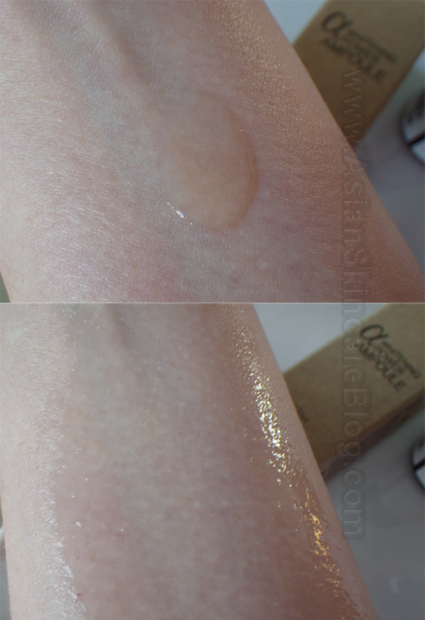 The liquid is slightly oily and it does leave a somewhat shiny sheen when fully absorbed. It took its sweet time to get fully absorbed, too. Hence my choice to use it only at night.
There was no detectable scent.
I didn't experience any adverse reactions when using Sidmool Alpha Whitening Power Ampoule. There were no breakouts, no irritation, no nothing. 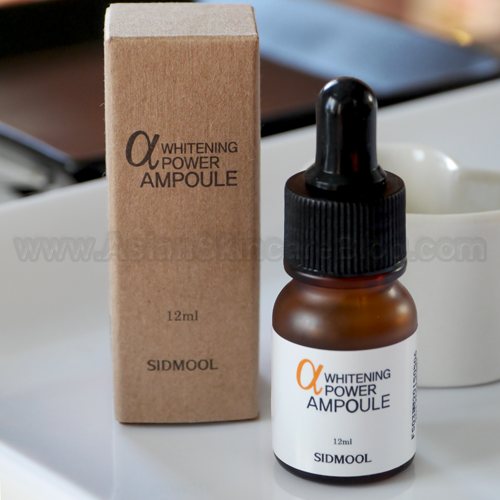 Sidmool Alpha Whitening Power Ampoule worked to control the redness in my cheeks, and in addition, helped with fading some other discolorations.

All in all, a lovely product with awesome results.

I have used products with niacinamide before and they did absolutely nothing for my skin. I strongly suspect that this time the results are due to arbutin rather than niacinamide, as arbutin is present in both of the Sidmool products that made my skin visibly brighter, more even and less flushed.

So those were the hits.

Now time to introduce the misses. 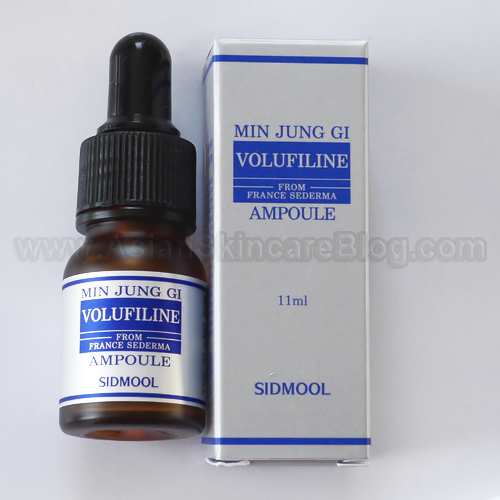 A bit of a background story.

A few years ago, when Sidmool still produced Pueraria Anemarrhena Elastic Essence, which contained pueraria mirifica extract, the hype was so great that I, the good lemming that I am, of course joined the masses and started using it as well.

It did absolutely nothing.

Then came the reformulated Sidmool Anemarrhena Elasticity Essence without pueraria mirifica, which I also used. And which also did absolutely nothing.

And that's how I ended up with today's contestant - Sidmool Min Jung Gi Volufiline Ampoule.

And these two ingredients are nothing other than Volufiline™, in other words, this ampoule contains 100% Volufiline.

What is Volufiline? It's an ingredient developed by Sederma and normally used as a bust enhancer. Yep, breast creams and that sort of stuff. 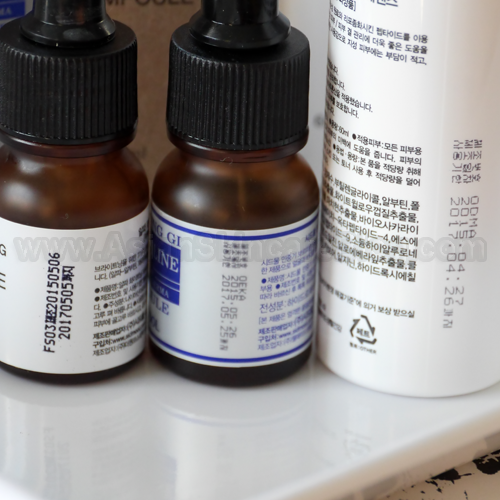 This is what Sederma has to say about it:

Volufiline™ is a non-hormonal treatment that reportedly stimulates adipocyte differentiation, proliferation and volume with a plant-derived molecule in order to bring volume where it is needed. The plant-derived molecule formulated into the ingredient is an extract of Anemarrhena asphodeloides, a perennial evergreen that grows in Eastern Asia.

The mechanisms of action were studied in vitro with a genetic analysis based on DNA array experiments. According to the company, a two-month clinical study, using the FOITS (fringe projection) technique to measure volume, curvature and body lines, revealed that the cleavage is rounded off by up to 8.4% with use of the product.


A two month clinical study, they say? I'm rolling my eyes so hard I can see my brain.
Notice the word "reportedly" in the text above?

So what do breast enhancement creams and general skincare have in common?
Because Volufiline "reportedly" stimulates fat production, the idea is that it can be put to work as a natural wrinkle filler. 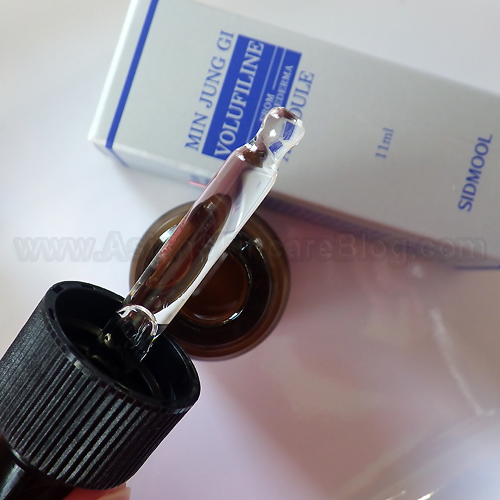 People on them innernets, including various beauty bloggers, claim Volufiline is a miracle worker, that it fills out wrinkles, tear troughs, sunken cheeks and stubborn frownies or smile lines. All of that in addition to making your bust and butt bigger at the same time.

They provide more or less blurry and out of focus before and after photos.
They conveniently ignore the fact that even minimal weight gain, caffeine consumption, or hormonal problems are going to influence facial fat distribution. All of that in addition to the power of autosuggestion and (scientifically proven and peer-reviewed) placebo effects. 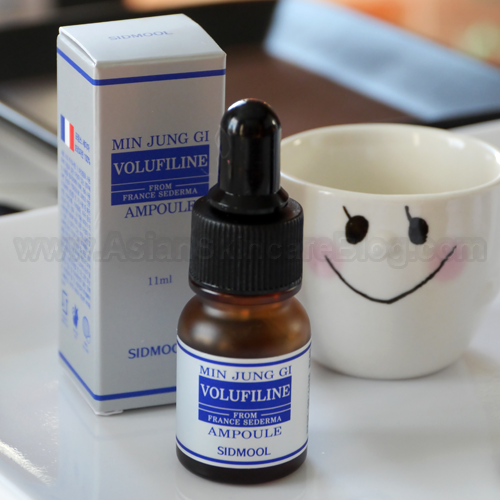 So, how did all this Sidmool natural wrinkle filler work for me?
After nearly 3 years of use I can say that not at all. It didn't work at all.

In fact, it made my undereye areas look worse. The wrinkles became MORE prominent and more visible. At first I thought I was hallucinating, that my skin was dry, that it was winter, or that it was stress, or that it was summer, or that it was whatever.
But those times when I stopped using the filler, after a few days (not weeks, DAYS!), the overall condition would improve.
Oh hit me with a wooden stick, for crying out loud! This shit was supposed to work the OTHER way round. 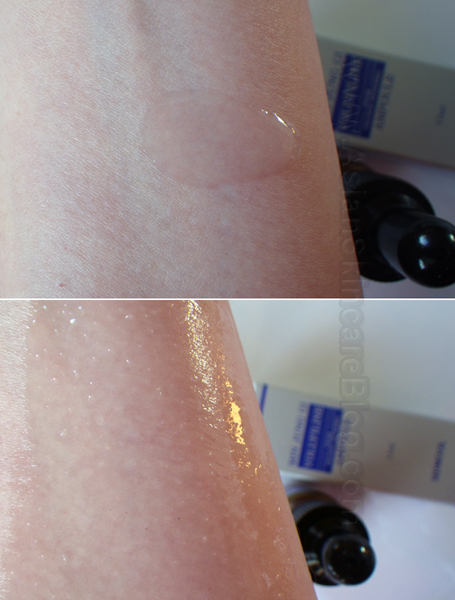 Over the years I have broached the subject of Volufiline and natural fillers with three different doctors specializing in cosmetic medicine. Their reactions?


The general consensus was similar in tone to topical collagen - we know it doesn't work, but we still use it, right?
And Volufiline? If you think it's working, then be my guest and knock yourself out. But don't be surprised if it doesn't.

I guess I was surprised it didn't. I mean, it worked, seemingly, for everyone else on the internet, right? Then why not for me?

In frustration I went ahead and got Restylane fillers under my eyes and couldn't be happier. Took 20 minutes and the cost was less than what I have spent on Sidmool's magical wrinkle fillers over the years.
That'll teach me. 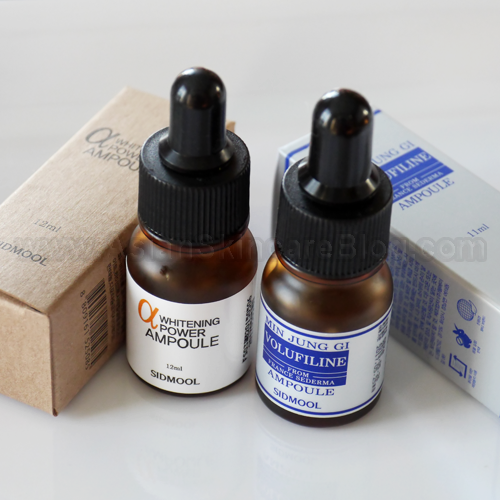 And the final dud of the evening?

This one doesn't even have a proper photo. Because, seriously, why bother?

I live in Japan. Japan practically invented astaxanthin skincare. We have asta hand creams over here. What was I thinking when I ordered Sidmool? Not much, apparently.
It was a sticky, nasty, primitive mess.
I gave it away.
And my friend threw it out.