Best and worst of Tatcha - Indigo cream and Silken sunscreen

I mean productwise, not PR or marketing stories. I already wrote about what I think about Tatcha's nonsensical claims of ancient geisha beauty secrets and mystical lost books full of Japanese skincare magic, which can be easily found on Amazon.
Here's the link to my Tatcha - first impressions blog post from last year. 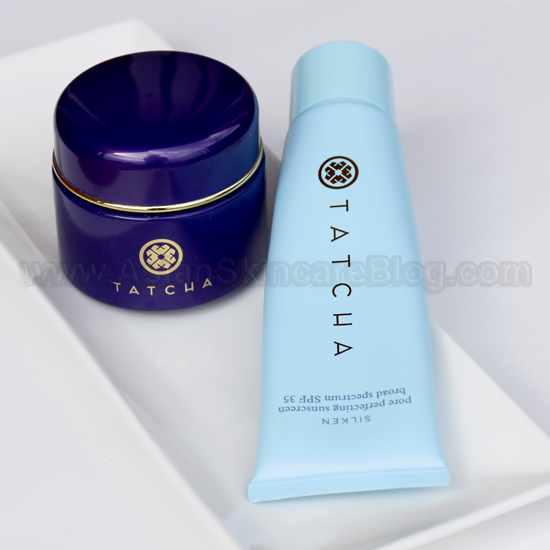 The rest of the stuff I bought and tried was either just OK, not worth the money, or simply meh.

Yeah, I might not be a fan of the brand's PR mythology, but that doesn't mean that I am going to automatically wave off the entire product lineup. No. If something is good and if it's working for me, I will tell you about it. I will tell you about the other stuff too, just to keep it nicely balanced, you know?


But before we begin, we need a little refresher lesson in botany. 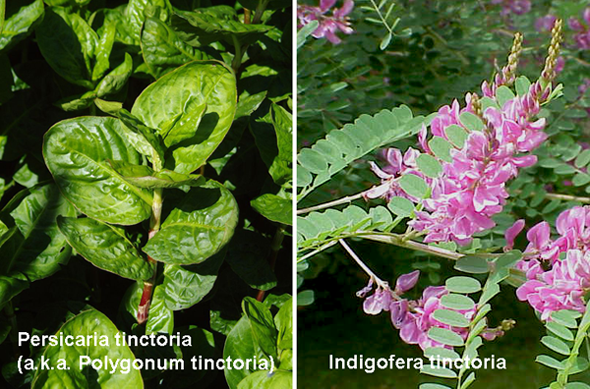 See this?
Two plants, right? Don't even look alike, right?
So what the hell do they have in common, apart from the "tinctoria" bit in their names?

Both of them are sources of blue dye used to dye clothes since the beginning of time. Incidentally, that's what "tinctoria" means - it's a Latin word meaning "used for dyeing or staining".
Both of them are commonly known as "indigo".
Both of them have anti-bacterial and analgesic qualities and have been in used in traditional folk medicine.

The one on the left is known as Chinese indigo (or Japanese indigo), genus Persicaria, family Polygonaceae.
The one on the right is the regular Indian indigo, genus Indigofera, family Fabaceae.

We are interested in the one on the left - Japanese indigo. 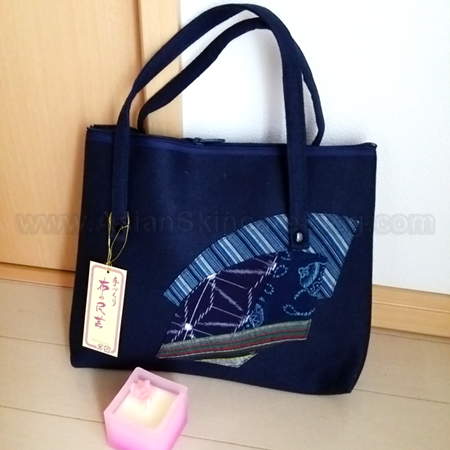 My pretty, pretty indigo blue purse. I got it in Kiryu, Gunma prefecture. Kiryu is a famous local indigo dyeing center. But there is also a famous indigo dyeing place in Tochigi, right down the street from me, in Moka (I love this town, btw!). They still do it the traditional way using locally grown indigo.

That's not the end of it, because there are actually five other different species of plants that are referred to as "indigo" in Japan, and that are also used for dyeing fabric: Indigofera suffruticosa, Isatis tinctoria, Strobilanthes cusia, Marsdenia tinctoria and Mercurialis leiocarpa. And all of those fuckers are called "ai (藍) something or the other" (ai meaning "indigo" in Japanese). Not to be confused with a different "ai" meaning "love".

You still with me?


Otherwise you're gonna end up looking like an idiot.

Why am I telling you all this?

It's like saying that AHA and BHA are the same. I mean both are acids, right? Both are used in skincare, right? Both exfoliate, right? Ergo, same!


a.k.a. (because this fucker has not one but TWO Latin names, mutually interchangeable) Polygonum tinctoria, a.k.a. Japanese Indigo, a.k.a. Chinese Indigo (because that's where it came from).

Tatcha's indigo cream contains extracts from both indigos - Polygonum tinctoria and Indigofera tinctoria, but it's only the first one that is the Japanese indigo of Tatcha's pretty story of Japanese tradition, Tokushima prefecture, banks of the Yoshino river, blah blah blah...

Here you can read more about Japanese indigo from a source that is not Tatcha, meaning it's not going to make you gag. (You're welcome).

Because Tatcha, as we all know, tends to have a very elastic relationship with facts, Japanese history and Japanese culture.
Anyway. 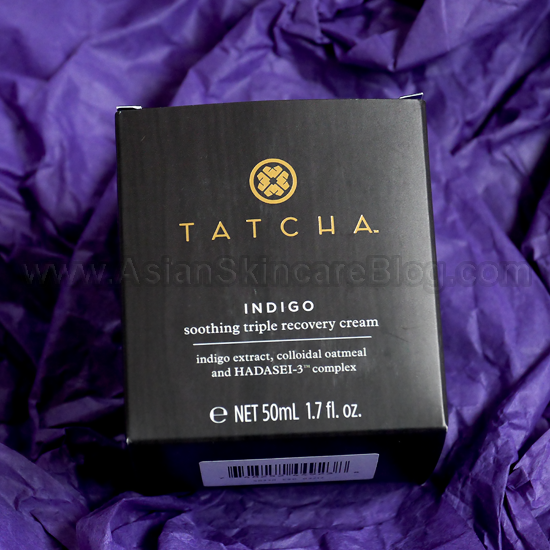 When I placed my massive Tatcha order last year, I ordered the travel size of this indigo cream. When the package arrived, there was a full size jar in it along with the small one I ordered. I was using that full size jar and loving the cream and then one day at some shitty hotel in a third world country, my precious Tatcha Indigo Soothing Triple Recovery Cream was rudely stolen from my room (they also stole Ettusais Amino CC cream in pink, WTF, in a country where no one is pink? Maybe they took it for a hemorrhoid ointment, or something, I don't know). 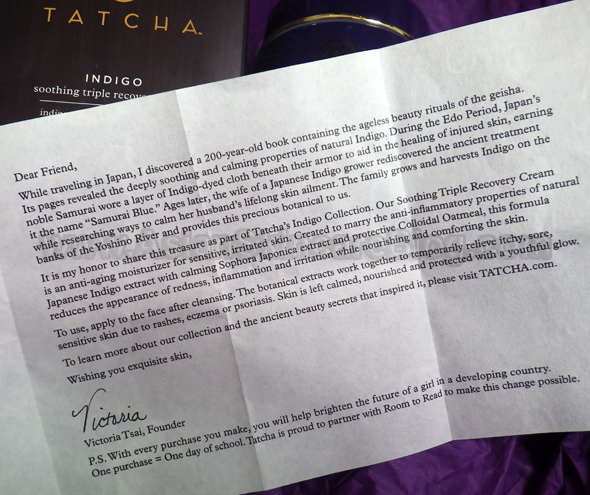 So when Miss Y (my dear friend who should be nominated for sainthood) was going to the US earlier this year, I asked her to bring me another Indigo cream. She did. She also brought a Tatcha lipstick, which, incidentally (#1), is also amazing. Miss Y compared the lipstick to Pola lipsticks, applied it onto my lips, and even though the color was totally not me, everything else about that lipstick was amazing. If Tatcha ever does colors other than hooker geisha red, I'll totally get them. The comparison to Pola made me go out and buy a Pola lipstick. And I don't even wear lipsticks! LOL!

Incidentally (#2), this is the second time when Tatcha and Pola meet in my narratives. Something's going on here... 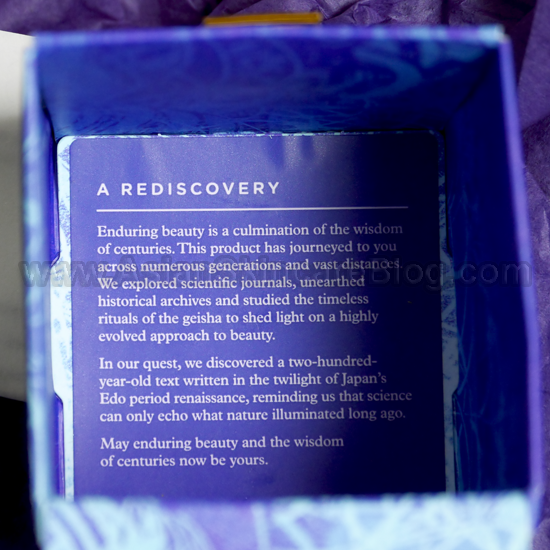 Every time I read Tatcha's PR bullshit, I roll my eyes so hard, I can literally see my brain. That two hundred year old text? I got mine on Amazon. For 12 bucks.

Anyway, where was I? 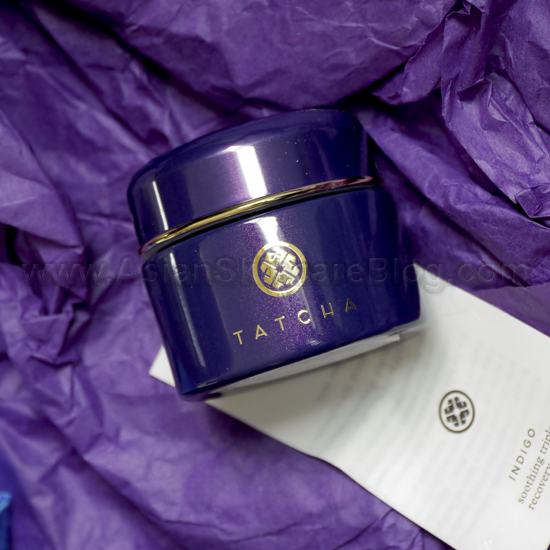 I did not expect much from this cream. Because Tatcha, you know?
So one day last year when my hands and wrists were being eaten alive by dryness and eczema, I was ready to try anything. I cracked open the Indigo Cream and smeared it on my red splotches. It said in the promo blurbs that it's supposed to help with eczema and irritated skin. Right? I wasn't holding my breath. I went to bed.

I woke up to soothed and calmed skin.

And grudgingly I had to admit that this cream was slowly moving into my must-have territory.
Guess what?

Nearly a year later, it firmly is in the must-have territory.

I don't know what I am going to do when I run out. Ordering just this cream from the US is not very cost effective. But I'll worry about it when the time comes. Right now I still have some left in the second jar that Miss Y brought back from the US for me. 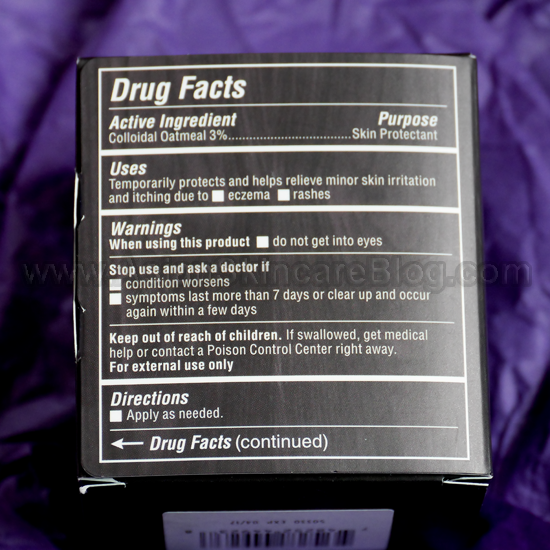 So what about this cream?

If you look at the box, you will notice that only the oatmeal is listed as the active ingredient. I supposed calling it "Oatmeal Soothing Triple Recovery Cream" doesn't sound as sexy as "Indigo". And that's fine, I don't mind. As long as the formulation works for my skin, it's all good. 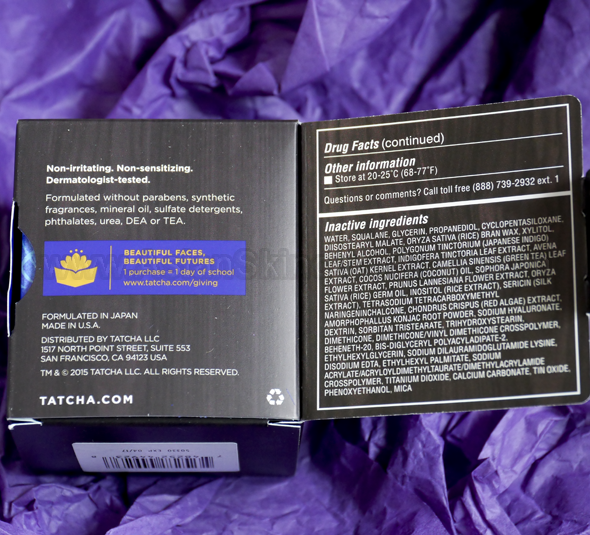 Can you see it?
This cream was not made in Japan. It was made in the US. It says "formulated in Japan", but knowing Tatcha's propensity for bullshit, I'm going to take it with a spoonful of salt. 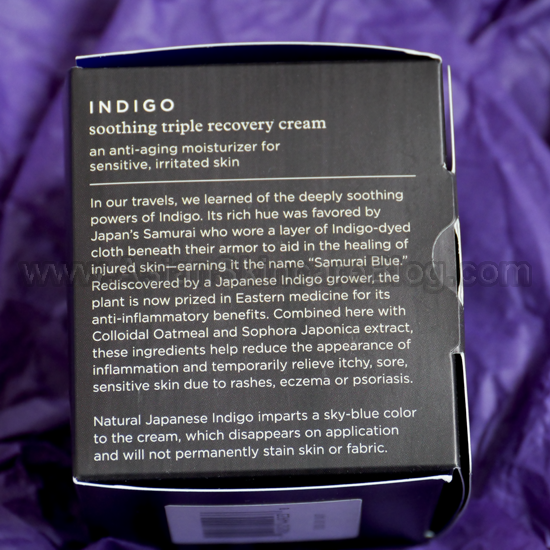 Make no mistake, this is a rich cream. For dry skin, it works both as a night and day cream. For any other skin, it's strictly an evening moisturizer.

It has a very faint smell. Very faint. Reminds me of oatmeal and basil. An odd combo, I know, but that was my very first though when I sniffed it. 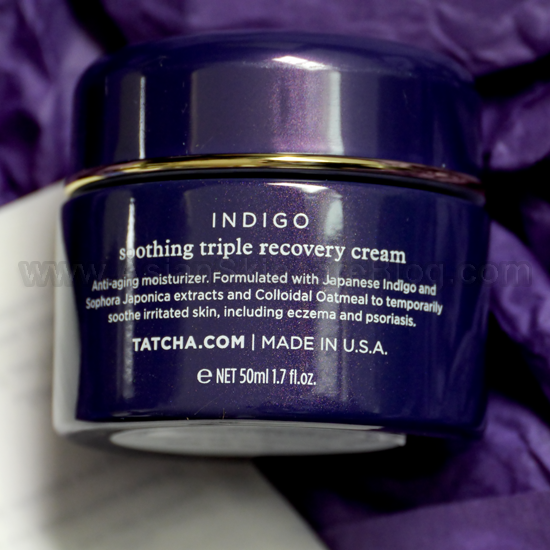 Indigo is blue, and so is this cream. Its light blue hue dissipates upon application and does not transfer to clothing. Don't worry, you will not end up looking like a Smurf. 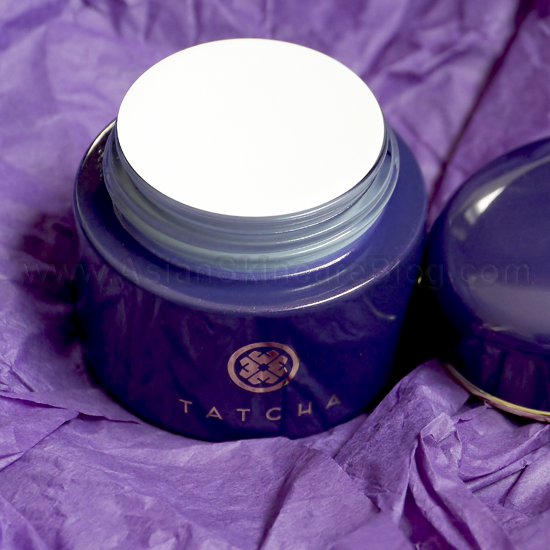 The jar looks very small. Hard to believe it contains 50ml. I did not see a spatula in my box. Doesn't bother me, because I prefer to use my fingers. 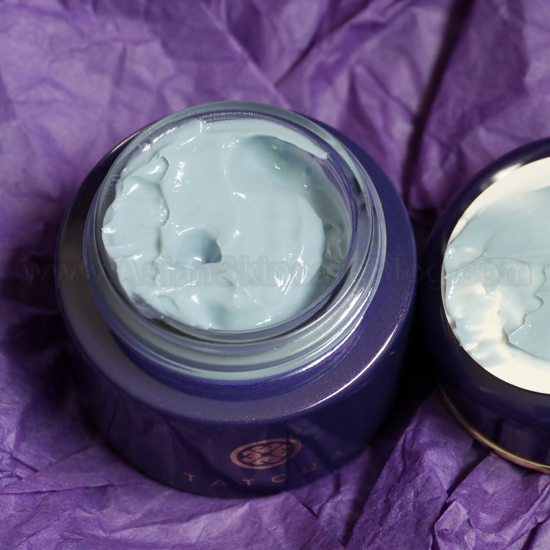 Yep. Blue.
This is what Tatcha Indigo Soothing Triple Recovery Cream looks like on the skin: 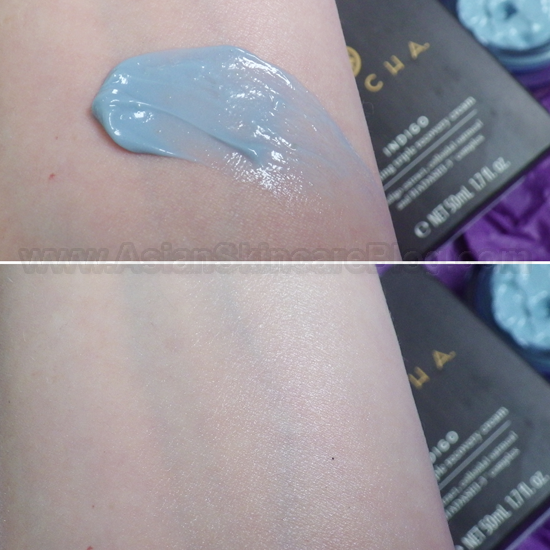 It takes time to absorb. It will feel slightly tacky and sticky right after application. But if you are patient, or have dry skin, you will see an incredible glow. Not greasy shine. Not oily mess. Just beautifully moisturized, calm, glowing skin.

And you know why I love it so much?

Take a look at the ingredient list (below).
See what's in the second place, right after "water"?
Squalane.


Tatcha has other products in the Indigo line. Am I going to try them? No, they are too expensive for me. If they were available locally, then maybe. But as it is now, getting them from the US is just too pricey.

It's in the SK-II price category, it's not available in Japan, but my skin seems to like it.
I will weep and eat nothing but rice and nori for a few weeks, but yes, I will be repurchasing. 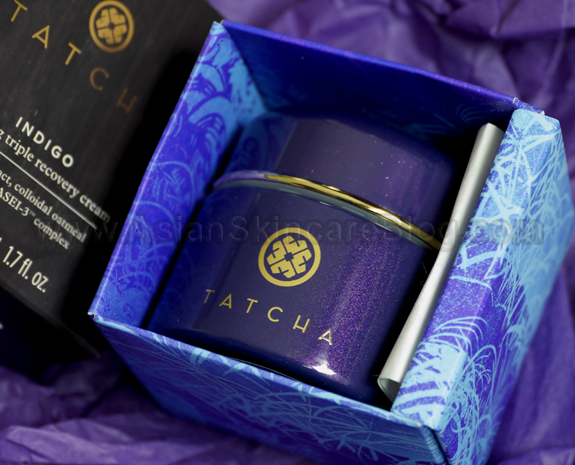 
And I'm sure it's used in many other products by many other companies. I'm just too lazy to search more. 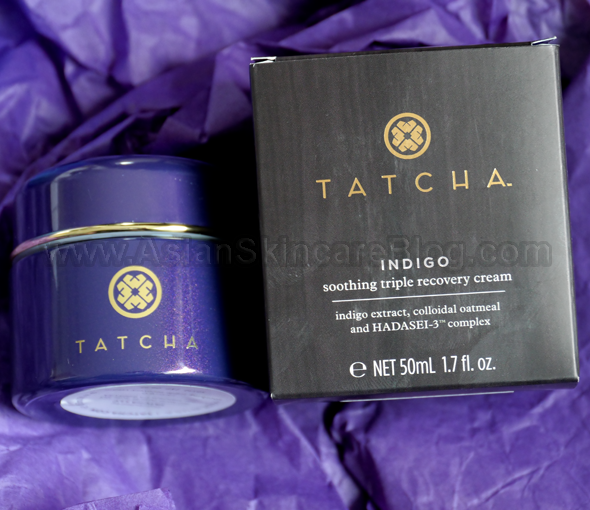 And that concludes our Best of Tatcha segment.

Yes, I know, blue creams and blue skincare in general seems to be in now. It's the new snail, if you will. May Lindstrom, Sunday Riley, klairs and a bunch of others all have something blue in their lineup. But as far as I can tell, none of the products contains indigo of any kind.

Let's move on to: 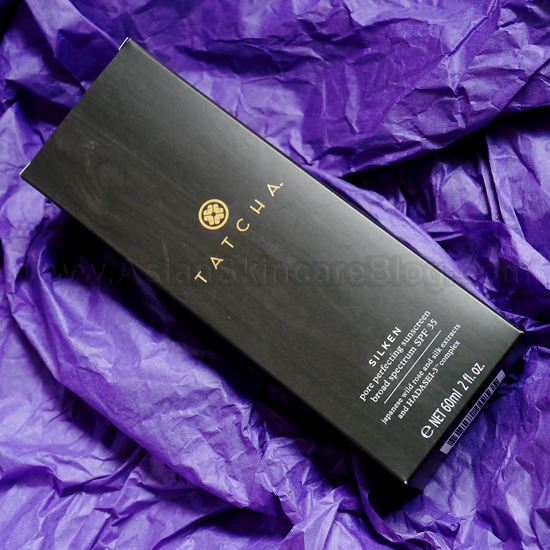 Full disclosure:
I didn't buy it. It was included as a present with my order.

Let's keep it short and sweet, because this sunscreen is not worth more than 5 minutes of my time. And definitely not worth the 68 dollars that Tatcha wants for it. 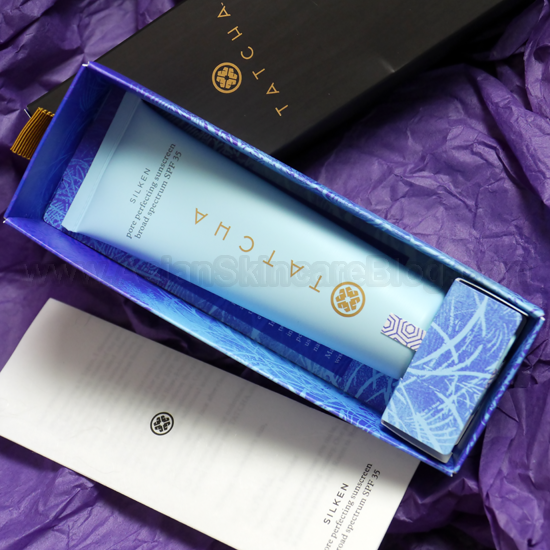 Only an idiot would willingly spend that much money on this mediocre approximation of a cheap Japanese sunscreen makeup base.

Tatcha claims this sunscreen was formulated in Japan and manufactured in the US.

Personally, I don't think this sunscreen got anywhere near Japan. 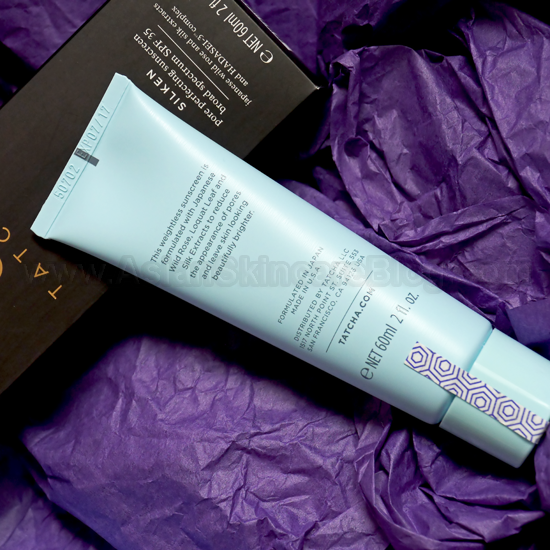 Don't get me wrong. I understand the limitations of producing an SPF product for the American market. The US is still in the middle ages when it comes to approved UV blockers.


Japan, on the other hand, is THE sunscreen capital of the world. Sunscreens here are cosmetically elegant (for the most part), plentiful, come in a dazzling variety of formulations and in every price point - from rock bottom cheapos for the equivalent of 5 dollars to high end skincare miracles that can cost upwards of a hundred bucks. 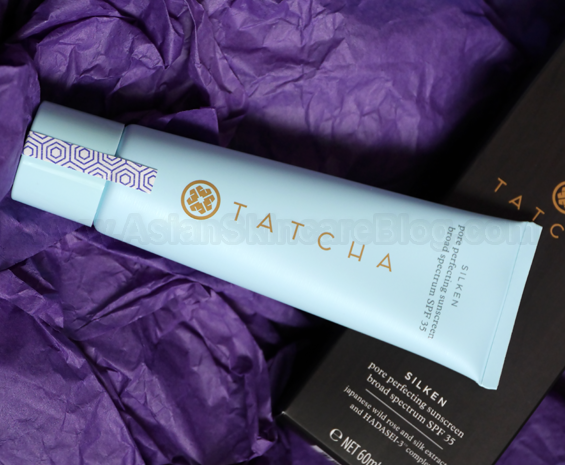 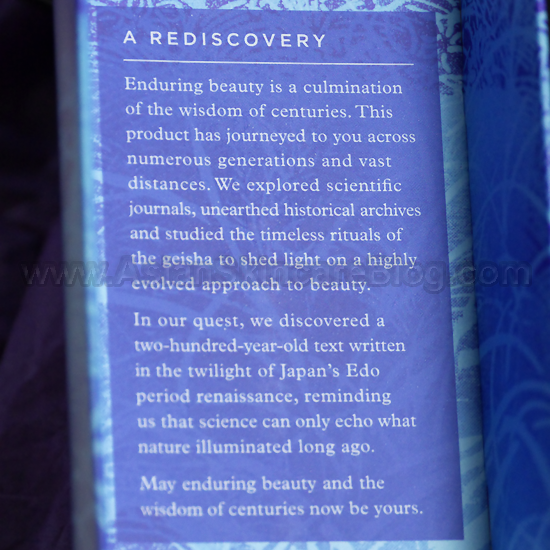 Standard for Japanese sunscreens is SPF50 and PA++++ (which, I suppose would be the equivalent of a very broad spectrum).

Lower SPF is usually found in base makeup and makeup primers.

This is exactly what Tatcha Silken Sunscreen is - an SPF enhanced makeup base. Tatcha even admits as much on their website.

Unfortunately, Japan also happens to be the leading power in makeup bases. We love our primers here and we sure know our bases. 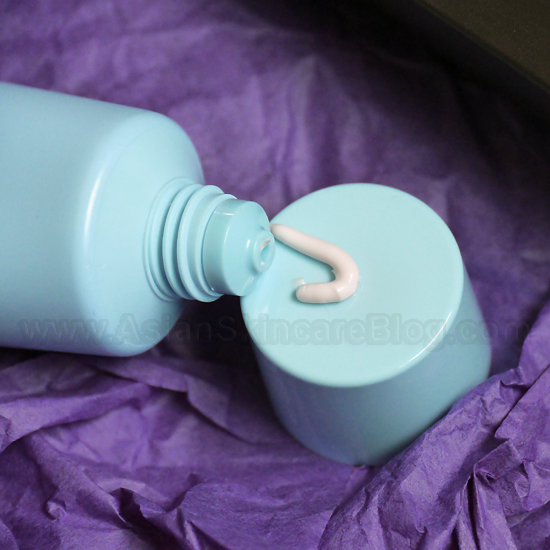 So how does Tatcha's Silken compare to an average Japanese pore perfecting makeup base? Not very well, unfortunately.


I was expecting sunscreen. I got something that felt like a wash off mask.

But then again, I am spoiled. I live in Japan and use Japanese sunscreens daily. 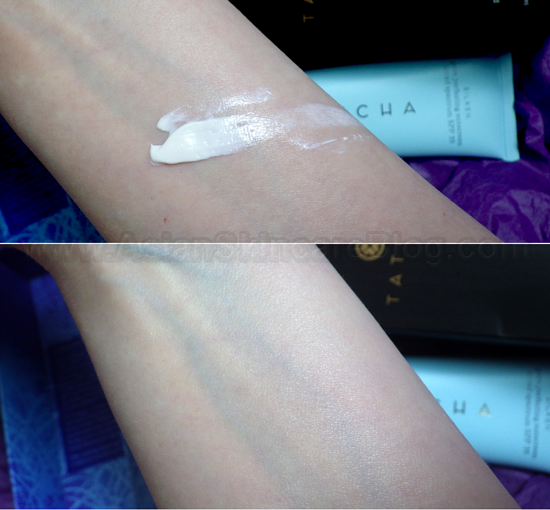 They were a lot less polite when they found out about the nonsensical geisha story used to peddle this product. Let's just say that good LOLs were had by all. 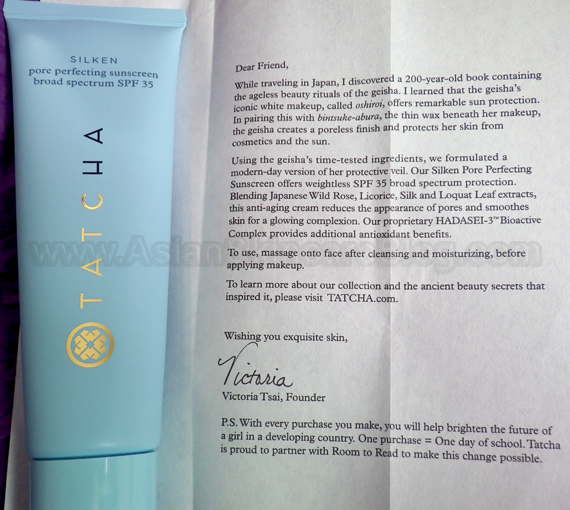 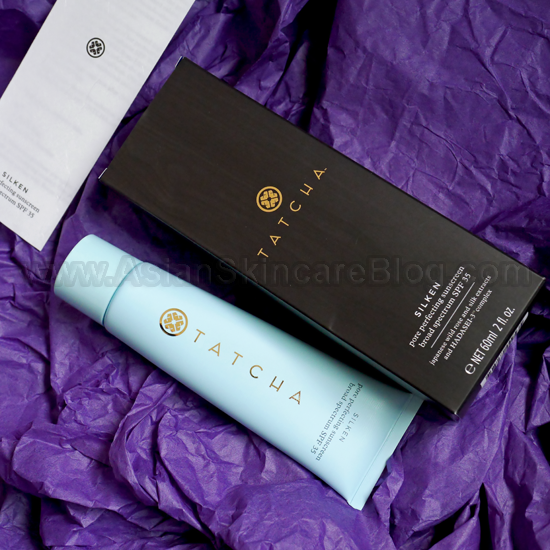 From all the Tatcha products that I have tried, this is hands down the worst ever. The exfoliating rice powder is a close second runner up, but this sunscreen gets the honors of being total shite. At least the rice powder I can use to wash my feet.


So there you have it.
One Tatcha winner and one Tatcha loser: 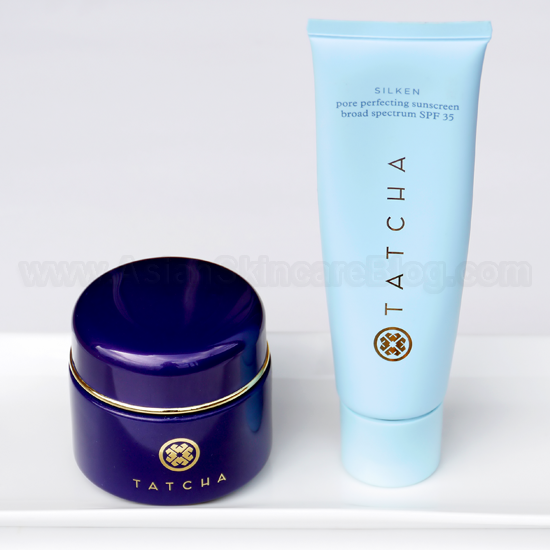 And did you notice that both of them were "formulated in Japan" and "made in USA"? Interesting, isn't it?

Now, if ever this Plum Blossm Lipstick comes back in stock, it shall be mine...